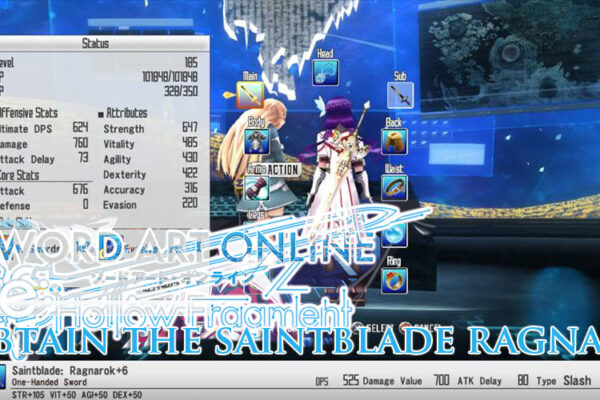 The Saintblade Ragnarok is one of the best 1-Handed swords in the entire game. Put together with the Prismblade Exeterna and the damage you will be dealing is unbelievable. With my set-up, my Arcane skill Nebular Empress can deal more than 5 million points of damage. While the stats may be a bit low to begin with, the extra effect makes it a powerhouse: Extra damage to bosses and Sword Skill damage up.

So how do you obtain this amazing weapon? Implementations? Boss drops? Unlike many powerful weapons(looking at you Prismblade Exeterna!), the Saintblade Ragnarok is obtained fairly easily. You don’t need to be geared to the teeth though it does help in terms of dealing damage.

This weapon is obtained as a reward from beating a boss rush in under 3 minutes. 5 enemies all up, though you fight them one on one. Each one that spawns will place a debuff on you, with the last boss inflicting the nasty ability of seal.

Preparing for the Rush
To begin with, you need to be far enough into the Hollow area to have unlocked Weald of the Wandering Aspirant in single player. You must do this in single player as the door is locked in multiplayer. Once in there, head to Miasmatic Ruins of the Sacred Sword and into the Sacred Sword’s Rest. Opening the door here will start the timer and make the first enemy appear.

Make sure you have purifying crystals to use when the fifth enemy appears. Be sure to have attack up buffs and any skills that are going to affect the cooldowns of your skills. You can also use attribute potions if you are still lacking in damage dealing numbers.

In terms of buffs, I use the following before opening the door; Sharp Rage, Strength, Sword Dancer, War Cry, Storm Mind, Variable Storm, Perfect Style(use if low on accuracy and keep missing), Hyper Armor. I also have the purifying flames buff but we won’t be using that now.

Once you’ve gotten all that, head to the aforementioned area. When you’re in Sacred Sword’s Rest, stop and buff before opening up that door.

A quick tip: if you are low on crystals and don’t get the weapon the first time, you can exit the game by shutting it down and restarting. That way you can attempt again with the same amount of crystals. Do not exit the area or teleport as the gave auto saves when you go through zones.

Fight!
As I said, there are five enemies in total, each that brings a debuff upon spawning. After the Neo Dallahan, use the Purifying Flames skill. When the dragon spawns, move away and use a Purifying Crystal. Until the Neo Dallahan, you don’t really need to use any items to purify the debuffs.

For the first enemy, I use Internal Rage. This should take him out in one hit. Second enemy is Myriad of Spikes, Deep Impact and a couple of burst attacks. Third enemy is The Eclipse and/or Nightmare Rain. Fourth, if Internal Rage is still on cooldown I will use Starburst Stream. For the dragon, I make Asuna get the hate so I can take it out with Nebular Empress.

It’s not that easy of a boss rush though you will get items if you take longer than 3 minutes, just not the Ragnarok. I was level 170 when I first attempted this and failed miserably. Second attempt I was 180, with a time of 2:53. Third time was much faster, with a time of 2:35. I could have done it even quicker had I not been interrupted and stunned.

You don’t need the best weapons for this trial. Just gear that increases skill damage, use the appropriate buffs, use potions if needed. The key is to deal as much damage without being interrupted, especially for the first attempt.

The more you level and gear up, the easier this will be so you can leave it until you gear up or level up before tackling this. The sooner you get it, the better because it’s well worth having.

There is no limit on how many of these you can obtain so long as you don’t go over the limit held in your inventory. You are able to get one for each party member that can use swords as well as getting it for friends if you so wish. You can even get a bunch for trading since people are always looking for these swords.

Good luck in obtaining the sword, and if you get it, congratulations! Next comes the fun part of upgrading, which I will be covering in another guide so stay tuned!