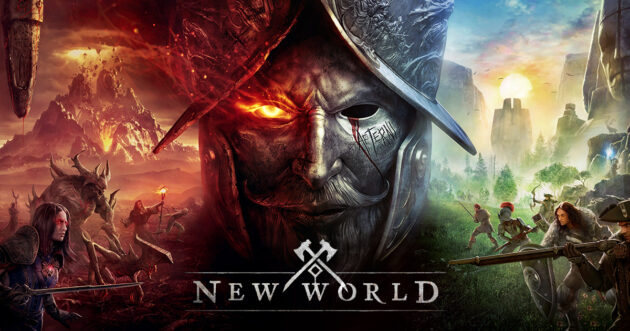 The MMORPG New World game was created by Amazon Game Studios. The game, which was the studio’s debut MMO, allows you to explore a lengthy main narrative on your own or go out on your own to cut down trees, make gear, or make money by selling goods on the player-run market.

You and other human survivors are dropped upon a cursed island where you must collect, build, and battle for the control of one of three opposing factions in New World, an MMO with a Colonial theme from Amazon Games. New World game set a number of significant milestones when it first floated in 2021. It quickly rose to the top of the charts on Steam after attracting over 900,000 active players shortly after being released.

There were several options for facial features, hairstyles, wounds, and even tattooing on the character customization screen. It’s fascinating that there is no class division and that the user is unable to assign points for specific personality characteristics or abilities because everyone starts off with a fresh slate. New World promotes character development via interaction with the outside world, favoring culture over the environment.

That said, growth in New World is tied to the specific activity; for instance, users cannot keep using an axe to chop down grunts and then utilize the experience points to level up their archery as they can in Skyrim. Instead, the character is instantly abandoned on an unidentified island with just a sword and ripped clothing after being formed. Then it encounters a zombie pirate, and New World doesn’t waste any time in putting the user in the thick of things. Users have the choice of using both light and powerful strikes to reduce the opponent’s health as well as the capability to block or move to escape harm.

It’s simple to understand, yet still challenging to take down foes without getting hit. Thus the simplicity works quite well in this situation. As a player advances through the game, fighting becomes more difficult as they unlock new sword and shielding techniques and are exposed to new weapons like arrows, magical staffs, and more. It is beneficial that the difficulty increases gradually since it keeps players from feeling stressed at the beginning of the game.

The endgame PvP scenarios, such as Outpost Rush, where two teams of 20 compete to gain control of three outposts, are some things most players are excited to test out. The 50vs50 War mode is another option, in which one side defends a fort while the other uses siege weaponry to overthrow defenses.

Additionally, there is a 30-minute Invading mode where 50 people defend against waves of AI opponents if you don’t feel like engaging in multiplayer combat. Failure will result in the downgrading of your region. The expedition will also serve as the dungeon mode for the New World, enabling five people to cooperate, go through riddles, and take down difficult bosses.

Ascending a steep hill covered in lush greenery while carrying a sword and a shield, the player starts up the ascent. Small, vibrant butterflies dance, highlighting the great New World detail that genuinely brings the settings to life.

Once the camera wanders, it begins to catch a stunning scene of a shimmering ocean and a bizarre volcano with magnetically levitated boulders. Even though it’s only a tiny portion of this enormous open universe, this is what eagers gamers to discover more about this game.

The developers of New World have done a fantastic job introducing some randomness. For instance, when you begin gathering resources in a low-level locale, you accidentally run into a densely red fog that is encircled by a menacing-looking monolith. Anyone would logically be intrigued by this sight and begin to approach. However, high-level enemies might sometimes appear out of the dense red fog with one reckless slash, wiping off a significant portion of the player’s health bar. You can either act as a coward and run away from the situation or be adequately equipped and face the monster. This game’s suspense and unpredictable nature further add to the movie-like experience.

Amazon outdid itself with its first actual game release. Not only is New World simple to use and thrilling, but it’s also delightful to play. This MMO has a cozy, single-player crafting experience vibe to it, with a bit of PvP thrown in for good measure. Try to play it for an hour and then see it miraculously multiply to two. New World requires the same time commitment as other old-type MMOs, it needs additional story material and gameplay variation to fill the holes in its expansive and gorgeously rendered world.

Things start to get interesting in the PVP endgame, but the grind to get there is absolutely mindless. You and your buddies may undoubtedly have some extraordinary adventures here because the missions are really repetitious, and the fighting is entertaining. Still, it depends on your desire to continuously grind and gather resources and the wellbeing of your server’s community.

Amazon has been releasing brief but regular updates that include new material, bug patches, and Ux improvements. New World will ultimately have more than enough endgame material to please even the most ardent fans if they can maintain this pace. This can encourage players to return to New World and provide the game the opportunity to compete with other MMORPG juggernauts. The first step is to update consistently, though. Could Amazon keep up? Time alone will tell. We hope this provided the review of the game you were looking for. With all of the fantastic features and experiences it provides, it is a must-try.

Follow us and get the latest news delivered to your timeline!
New World Game Review
Previous ArticleA newly discovered Warzone 2 glitch turns trucks into submarinesNext ArticleThe Gears of War Remastered Collection has not been cancelled