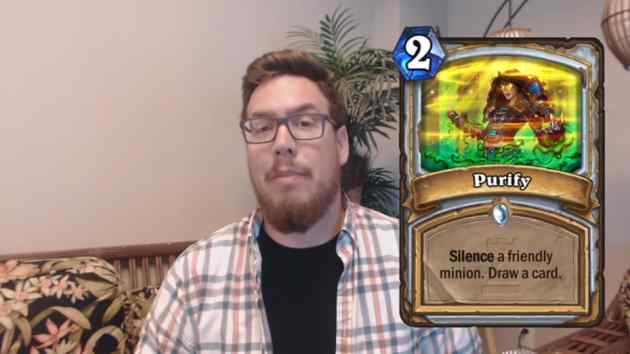 One of the new cards being added to Hearthstone with the upcoming One Night in Karazhan expansion has been creating a negative stir.  Purify is a new card for the Priest class, which is currently the weakest class in the game, and has received a great deal of criticism from several noteworthy players for possibly being the worst card to have been introduced to the game yet.

Most notably, Kripparrian posted an extensive rant against the card on his Youtube channel that mainly focused on how the card will effect the Arena game mode. Arena has players drafting a deck of random cards and seeing how far they can go playing against people working under the same conditions, so introducing a bad card is always going to have an impact in that mode.  However, the development team has issued a surprising statement in regards to Purify and how they are responding to the criticism.

Ben Brode, the lead designer on Hearthstone and the face of the game, released a Designer Insights video on the official Hearthstone Youtube channel speaking specifically on Purify.  He explains that the design team’s thought process on designing the card was to support the niche archetype of Silence Priest that, while not a competitive-level deck, still has viable strategies and can take people by surprise.

However, they do understand the importance of Arena balance and have been working on a new algorithm for the frequency of specific cards that appear in Arena in order to even out the various classes.  While this isn’t expected to be ready any time soon, the developers are taking action to prevent Purify from skewing Arena balance by keeping it out of the game mode entirely.  This isn’t the first time that a card has been made undraftable in Arena as all of the C’Thun-based cards introduced in Whispers of the Old Gods were given the same treatment.

Brode closes his video with the following statement: “We’re going to disagree sometimes on decisions that we make, and we’re going to make mistakes, too, but hopefully we can learn together and make the game better overtime.”  What are your thoughts on Brode’s feedback to the community?  What do you feel still needs to be done to sort out Arena balance?  Leave a comment below and let us know what you think.

Follow us and get the latest news delivered to your timeline!
ArenaBen BrodeBlizzardHearthstoneOne Night in KarazhanPriestPurifyTCG
Previous ArticleLost Soul Aside Looks PhenomenalNext ArticleNo Man’s Sky Base Building Incoming & I Can’t Wait for It