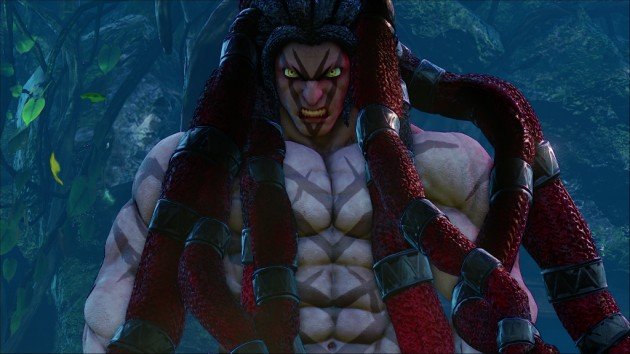 The best fighting games players from around the world gathered this weekend at Las Vegas to duke it out at EVO 2015, the largest tournament of the genre. At the event, Capcom brought us new announcements for its upcoming game Street Fighter V. First of all we got an entirely new character called Necalli. (picture above)

The fighter that will compete against Dee Jay for the coolest character that wear dreads in games ever seems to use a really offensive grappler style. His move set appears to mix Wolverine from Marvel vs. Capcom series but also appears like SNK’s Iori Yagami Orochi from King of Fighters’ 97. Please check his reveal trailer below:

Even more important than a new character, Capcom revealed its new policy regarding additional content after game’s release. Instead of launching new expanded versions like Super and Ultra Street Fighter IV, new content will be directly available for purchase in the main edition. However, if you don’t feel like emptying your piggy bank in order to buy the new characters, you will be able to add them to your collection just by playing and dedicating yourself.

The number of characters in the final version was also revealed: 16 world warriors will join the fray and four of them will be newcomers to the franchise. For now, Capcom revealed Ryu, Chun Li, Charlie (Nash), M. Bison, Birdie, Cammy, Ken and Necalli. As reported, Blanka was teased and will surely be included in the roster, but an official announcement will be made by Yoshinori Ono himself on October, when he will be visiting Brazilian fans at Brazil Game Show 2015.

Street Fighter V will be released on PS4 and PC on October 2016.

Follow us and get the latest news delivered to your timeline!
EVO 2015Game NewsPCPlayStation 4Street Fighter V
Previous ArticleGet This Epic Fallout 4 LithographNext ArticlePredicting the Features and Release Date of Kingdom Hearts III