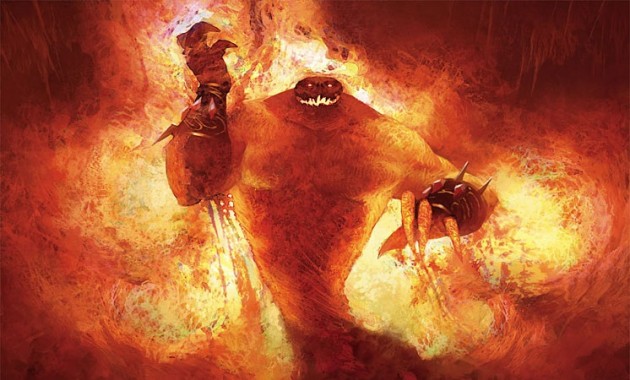 With Garr out of the way, it’s time to take on Ragnaros’ right-hand fire elemental: Baron Geddon.  Geddon is especially tricky with his hero power, Ignite Magma, which deals 5 damage to you at the start of every turn for no mana cost, but will only activate if you have any unspent mana left over from your last turn.  If you aren’t making the full use of your mana with each turn, Geddon will be able to rush you down with ease.  Like Garr, Geddon has a class challenge along with his normal and heroic challenges.  You’ll learn how to take down all three versions of this fearsome opponent.

You’re best bet at taking on Geddon’s normal challenge will be a Mage deck with a focus on mechs.  You’re main focus will be to generate spare part cards that can help you spend every mana crystal each turn.  Cheap minions like Clockwork Gnome, Mechwarper, and Tinkertown Technician will work wonders in this fight.  Having around four to six minions costing 1 mana should be good for giving you a play on every turn, but don’t worry to much about trying to get a 1 drop in your opening hand.  However, don’t forget to throw a few higher cost cards into the deck for the mid-game.  Azure Drake and Loatheb are easily the best picks in this regard.  Finally, you’ll want a fair share of damage-dealing spells like Frostbolt and Fireball to deal with enemy minions, finish off Geddon, and possibly kill your own minions if the need arises.  We’ll get to that last part soon.

Geddon’s deck will try to overwhelm you early on with Flame Imp and Imp Gang Boss.  He also has Fire Elemental, Fireguard Destroyer, and Druid of the Flame (which he will always make a 5/2 because the AI is silly like that) to carry him through the mid-game.  He’ll hold control of the board with damaging spells like Lava Shock, Lava Burst, and Hellfire.  It’s a decent deck, but none of that is especially intimidating.  The worst thing you have to look out for is Geddon’s one-of-a-kind spell.

The biggest threat in Geddon’s deck is a special spell that only he can use called Living Bomb.  This puts a curse on one of your minions that sets it to self-destruct at the end of your following turn and deal 5 damage to you and all of your minions.  It costs him 4 mana, so keep an eye out for it around turn four.  Stopping that blast from going off is going to be a top priority and Geddon has no shortage of this spell so you’ll always have to be ready for it.  The best way to counter it is using Youthful Brewmaster or Ancient Brewmaster to return the afflicted minion to the hand.  Once returned to the hand, the minion will revert to its original state and the Living Bomb curse will be gone for good.  Alternatively, you can run your afflicted minion into one of Geddon’s tougher subordinates and sacrifice it.  The explosion won’t go off if the minion dies to anything other than the specific trigger caused by the spell itself.  Unfortunately, he knows better than to play his tougher minions after using Living Bomb, so there usually won’t be a good target to sacrifice your cursed minion to.  This brings us back to using your spells to kill your own minions.  It may seem wasteful to spend your spells on your own minions, but the Living Bomb will often cost you much more.  If the afflicted minion is the only one you have on the board and your health is still fairly high, it may be better to just let it go off. 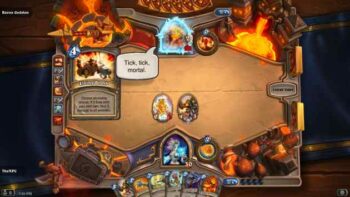 While fighting Geddon, you’ll mostly want to focus on attacking him directly.  No matter how well you build a mana curve for your deck, there will always come a point where Geddon’s hero power is going to fire off.  Your goal is to kill Geddon faster than he do any serious damage to you.  Of course, you should keep an eye on the board and make sure Geddon’s minions can’t overwhelm you.  Also, don’t spend your spells to damage Geddon’s face unless you’re able to kill him right then and there or if you just really need to spend some extra mana.  With Geddon’s own Flame Imps dealing extra damage to him, it shouldn’t be to hard to rush him down.  Just remember that he has Hellfire for AoE, so try to avoid flooding the board if you can.  Take him down to acquire Blackwing Technician, the very first dragon-synergy card.

I hope you like math, because the Shaman class challenge is going to have you counting mana crystals like you’ve never counted before.  Now you have to take on Geddon armed with a deck focused on the overload mechanic.  Overload basically splits the mana cost of a card over two turns.  These cards are cheap to play immediately, but will lock up some of your mana crystals on your next turn.  With every play, you’ll have to consider not only how much mana you can spend this turn, but also on the next turn.  Take your time and plot out how much you can afford to spend each turn and try to use the overload effect to your advantage.  Just be careful that you don’t lock up all of your crystals for your next turn or you’ll be left unable to counter Geddon’s plays.  This challenge will also let you play around with the new Lava Shock spell, but don’t use it unless you know you can spend all of those unlocked crystals.  Defeat Geddon to make Lava Shock a permanent part of your own collection.

Finally, we have Geddon’s heroic challenge and it is the craziest one yet.  First, Ignite Mana now deals 10 damage instead of 5.  Second, the Living Bomb spell has also been doubled to 10 damage.  Third, Geddon effectively has 100 health for an absurdly tanky opponent.  Obviously, this is not going to be an easy fight on the best of days and it’s not something that can be accomplished without a wide collection of cards.

This Mage deck focusing on Molten Giants and survival will take some risks, but it should give you the edge you need to bring down this massive adversary.  Dealing heavy damage with the Molten Giants is key to bringing down Geddon’s gigantic health bar.  Echo of Medivh is certainly helpful in multiplying your damage output, but it isn’t required.  I was able to one-shot Geddon with a version of this deck that didn’t have any copies of Echo of Medivh.  It was as down to the wire as you can get, but it worked.  I also cut one Unstable Portal, one Ice Block, and one Ethereal Archanist, replacing them with an additional Duplicate, two Ice Barriers, and two Ancient Brewmasters.  The Brewmasters are fairly key cards for this challenge having them bounce each other to your hand is the only way you’re going to burn through your extra mana crystals in the late game.

Survival is going to be key for this fight.  With this deck, you’re going to take one hit at the start guaranteed and it’s a price you’ll have to pay to get your giants out.  That said, don’t let Geddon strike you when you can avoid it.  Antique Healbot and at least one Ice Block are going to be key to keeping you alive, while Mad Scientist will help you track down your life-saving secrets.  Frost Nova, Blizzard, and Flamestrike will give you a massive edge in controlling the board.  None of Geddon’s minions are especially tough, so using these spells at the proper time will leave him helpless.  Finally, throw in Acolyte of Pain and Arcane Intellect for card draw.  The one thing you need to be cautious of is Duplicate making copies of your Acolytes.  Not only are they weak, the excessive card draw will make fatigue a major threat.  I had the misfortune of having this happen to me twice on my run and, while it didn’t lose me the game, it certainly did more harm than good.  Try to avoid it, but compromise when you have to spend mana.

With that, you should be set to take on all of Baron Geddon’s challenges.  Be sure to check back later for the final boss of the Molten Core with Majordomo Executus and Ragnaros the Firelord himself.

Follow us and get the latest news delivered to your timeline!
Baron GeddonBlackrock MountainBlizzardHearthstoneMolten CorePCTCG
Previous ArticleMortal Kombat X Will Let Players Try Out DLC They Don’t OwnNext ArticleWhat Other Settings In History Could Assassin’s Creed Visit?