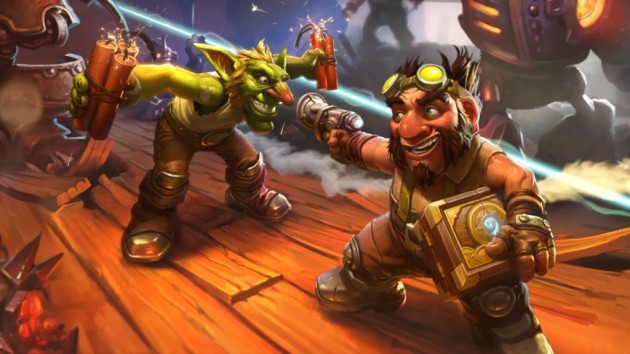 We’ve taken you through some of the most reliable cards for the Basic set and for the Mage class, so now is a good time to go over some of the best common cards out there for your Hearthstone collection.  Neutral cards can be used in any deck regardless of class will be vital to filling out all of your decks.  I don’t recommend going out of your way to craft any of these cards because your going to open plenty of packs over the course of the game and just be flooded with commons.  Rather, these are the cards that you’ll be able to run with in the most decks, are the most reliable on a general basis, and you shouldn’t disenchant to stock up on dust.

I’ll be going over the five best Hearthstone common cards from both the Classic set and the Goblins versus Gnomes expansion.

Silence is a valuable resource in Hearthstone as it can remove any buff, debuff, or built-in ability of a minion.  Unfortunately, there aren’t many good cards with silence effects and Ironbeak Owl isn’t an exception.  Any minion with only 1 health isn’t going to go far and is especially bad against classes that can kill it with their hero power like Mage.  That said, the Owl’s low cost means that it can do its job without taking up too much of your turn and can generally be pretty viable.  The fact that it’s a beast type can also have some value, but only in very specific decks.  In some decks, you may want to use the beefier Spellbreaker instead.  It all depends on how your mana curve is balancing out and how important Silence is for the strategy that you’re going for.

Being able to control the game in its late stages is vital and few help you hold the board like the Frost Elemental.  Its 5/5 body holds up well in the late game and its ability to freeze an enemy when its summoned gives you an opening to trade favorably or can even save you from certain death.  Freeze prevents an enemy from attacking for one turn and can cause a serious tempo swing.  You’ll probably trade it out with rarer minions as your collection grows, but it’s a good pick in the early days.

Card draw is vital in any deck as it keeps your options varied.  Gadgetzan Auctioneer and Cult Master are good options in specific decks, but the Acolyte of Pain can serve you well in almost any deck.  Its 1/3 stat line for 3 mana is weak, but you can get a good amount of draw out of him with smart plays.  The Acolyte draws a card for you any time he takes damage and could potentially give you a serious card advantage over your opponent.  Buffing and healing him with a Paladin or Priest deck can make him an incredible resource.  Perhaps the best classes for getting value out of him are Mage and Warrior as you can easily damage the Acolyte on your own and ensure that you get a good amount of draw out of him.

As I’ve said before, turn 4 is one of the most crucial in the game because that is when the Yetis start to come out and you need to be able to trade favorable with that 4/5 stat line.  The Dark Iron Dwarf, on its own, may not be able to handle an enemy yeti well, but his ability to give a minion 2 more attack points for one turn allows you to trade one of your early minions into one of your opponent’s mid-game minions while also putting a tough 4/4 on the board.  He’s both a highly adaptive bit of utility and a solid body on his own.  The smaller version, Abusive Sergeant, can have similar utility, but is less likely to trade well on his own with only 1 health.

This was a very easy pick as Harvest Golem has always been one of the best cards in the game, common or otherwise.  A 2/3 stat line at turn three isn’t great on its own, but its ability to bring a 2/1 to the board after it dies makes it a very sticky minion that gives you a strong control of the game.  Yeah, your opponent can silence it to stop the token from appearing, but silence is a precious resource and seeing your opponent spend it early will make your late-game minions all the more secure.  With the release of Goblins versus Gnomes, it has actually gotten even better with the addition of mech synergy on both the Golem itself and the token it summons.

Need to protect your side of the board even in the early game?  Annoy-o-Tron is just what you’re looking for.  Armed with taunt and divine shield, Annoy-o-Tron takes a while to get rid of, but your opponent has no choice other than to focus on it first.  Meanwhile, you can set up a team of minions to harass you opponent and gain an early edge on the match.  Annoy-o-Tron also scales decently into the late game, soaking up two hits that your opponent would have rather used to finish you off.

Much like the Harvest Golem, Piloted Shredder is good simply for being a sticky minion.  However, it’s not as good as Harvest Golem because it is much less consistent.  Your 4/3 Shredder could die and be replaced by a 4/4 Millhouse Manastorm without any drawbacks.  On the other hand, you could end up with a measly 1/1 Novice Engineer without even getting the card draw out of it.  You could even get a Doomsayer or Lorewalker Cho at the worst or best possible time.  Any collectible 2 drop in the game, including class exclusive cards, could appear when that Shredder hits the eject button and the results are anyone’s guess.  Still, the important part is that you have a body on the board.

This card is flat-out broken.  I’m still trying to wrap my head around how Blizzard could release something this blatantly overpowered.  While a 2/3 for 2 mana isn’t quite as good in general as a 3/2, it is still a good stat line and that heightened survivability makes its ability to reduce the mana cost of all of your mechs go farther.  It’s also a mech itself and getting two onto the board early on allows you to flood the board with ease in constructed play.  So, what incentive is there to use something like a River Crocolisk or a Pint-Sized Summoner over this?  What drawback is built into this otherwise devastating minion?  THERE IS NONE!  Mechwarper is just inherently better than almost every other neutral 2 drop in the game just because it is.  There are five other mechs on this list and we’re not even covering the class exclusive mechs, so you can imagine just how insane this card is in the current meta game.  Mechwarper should have been nerfed months ago back when GvG was still in development.  Fortunately, Hearthstone has a policy that any non-soulbound card that gets nerfed can be disenchanted for full dust value, so you have nothing to lose by crafting blatantly broken cards like this and running them in every deck you build.

Some decks demand damage mitigation, particularly weapon-heavy ones, and you don’t get much better options than the Antique Healbot’s ability to heal 8 points to your hero when its summoned.  Many cards that directly effect the health of the heroes, like Nightblade and Priestess of Elune, tend to be overpriced for their effects and are unplayable, but Healbot only costs 2 more mana than you would normally pay for a minion like it for massive recuperation.  If you need a way to last against aggressive decks, Healbot is just what you need to bounce back from the abuse.

As I’ve said with the Chillwind Yeti, a good stat line can be all that a card needs to be great.  Most 3 drops in the game have 3/3 stat lines, meaning that the 3/4 Spider Tank can trade favorably with in most situations.  The Tank also counts as a mech, so there are plenty of cards to make it even more useful. Whether you’re looking flashy mech plays or pure substance, the Spider Tank delivers on all fronts.

Your Hearthstone collection is off to a good start, but there are plenty more facets of the game to go over.  Next time, I’ll take you through one of the best classes that even new players with few cards can build a competitive deck from.  Happy dealings.