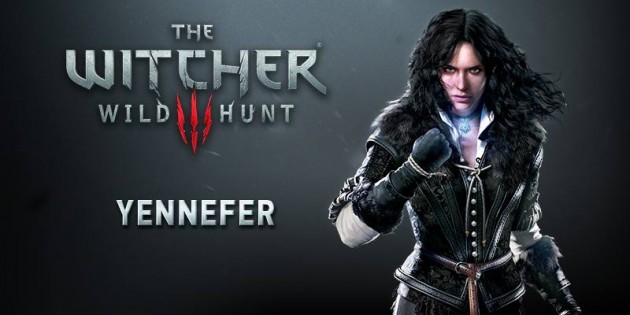 Yennefer of Vengerberg is a sorceress and the main protagonist Geralt of Rivia’s lover, even though their relationship is somewhat complicated. She act’s as a motherly figure towards Ciri and looks at her as if she was her own daughter. Yennefer, like all sorceresses, is sterile, meaning that she cannot have children although she has attempted many times to find a away to become fertile, but all to no avail. She is also a close friend of Triss Merigold, who also loves Geralt and acts as his canon lover in the previous Witcher games, but not in the books.

While at Nenneke’s (a priestess of Melitele) Temple in Ellander, Yennefer taught Ciri about magic, and although she was very strict at first, she softened and became a patient and very good tutor to Ciri, the child of destiny. She clashed many times with Nenneke, who was worried about Ciri’s well being, although they both left on good terms.

Although very beautiful, Yennefer is actually in her nineties and she has her famed looks because of magical help. Geralt realises that she was once a hunchback, but he still loved her nevertheless. During the Battle of Sodden Hill, Yennefer lost her eyesight as she was blinded by Fringilla Viga, a Nilfgaardian sorceress. Her eyesight was later restored by magic, however Yennefer still bears the emotional scars of that event. Once while at Nenneke’s Temple, Ciri asked her why she was staring at a linden tree, when Yennefer replied, “Nothing. I’m simply feasting my eyes upon it. I’m happy that… I can see it.”

One of the more notable things about Yennefer is her lilac eyes, and she always uses lilac and gooseberry perfumes. She is rarely seen without wearing black and white.

She was king Demavend of Aedirn’s royal advisor, but he is now dead as he was killed by Letho, the kingslayer, in the intro to The Witcher 2: Assassin of Kings.

At the end of the books, Geralt was killed for protecting non humans in Rivia after riots broke out, and Yennefer perished while trying to heal him. However, Ciri took them to another world and to Malus Island (known as the Isle of Avallach in the game), where they were both saved. They spent sometime together there, but the Wild Hunt  steals Yennefer away from him. Once Geralt finds the Wild Hunt he exchanges his soul for Yennefer’s. It is generally excepted that the Wild Hunt let Geralt go because he is very good at killing. Another reason could be because they believed he would lead them to Ciri.

Yennefer has yet to be in a Witcher game before, but she makes her debut into the series in the upcoming game, The Witcher 3: Wild Hunt. The player will be able to choose Yennefer as a romance option for Geralt. Yennefer was however seen in many flashbacks in The Witcher 2: Assassin of Kings, and it is revealed at the end of the game that she is most likely still alive and in the city of Nilfgaard.