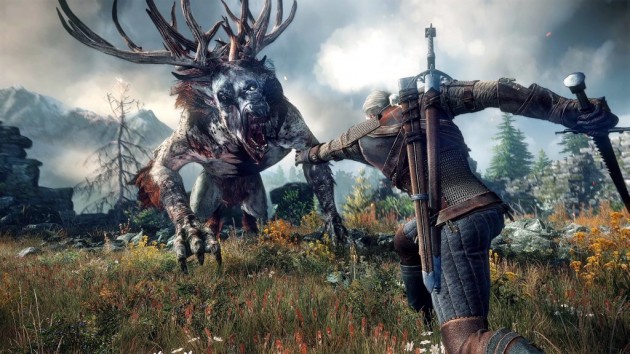 The Wild Hunt is a cavalcade of spectral horseman who terrorize humans and it is said that they are an omen of death and misfortune. The sight of the witcher Wild Hunt is also known as an omen of war. They abduct people and force them to join them on their ride, and only a few of those who have been abducted have managed to escape, however they were all considered mad and their stories considered nothing but the ramblings of madmen. It is said that they abduct more people during winter and war time, and during the last great war they abducted over twenty  people in Novigrad once they had passed through. The abducted can also reappear many years later, without having aged at all, this is because they are from another world and their time flows differently from the human world.

The Elder Races, dwarves and elves, have no mention the Wild Hunt in their culture or history, even though they have been round for much longer than the humans.

The King of the Wild Hunt imprisoned Ciri in his world where he tried to force Ciri to have a child with Auberon Muircetach, the King of the Aen Elle. This is because Ciri’s ancestor Cregennan of Lod fell in love with Lara Dorren, an elf, which was considered a theft of heritage by the Aen Elle and the humans despised it too. The humans killed Cregennan before his daughter was born and Lara died shortly after giving birth. Their half elf daughter Riannon was adopted by the queen of Redania, Cerro. The Aen Elle wanted Ciri, the descendant of Lara, to have a child with Auberon to reclaim their stolen heritage. However, Eredin accidentally killed Auberon by giving him an overdose of an aphrodisiac which was supposed to increase his chances with having a child with Ciri.

The Wild Hunt in The Witcher (Game Spoilers)

During the Witcher, the Wild Hunt appears many times to Geralt of Rivia. The first time is during the prologue when they’re outside Kaer Morhen. During the assault on Kaer Morhen, young witcher Leo was killed by the Professor, and in chapter one Geralt see’s Leo’s ghost along with the Wild Hunt.

Also in chapter one, you can do the optional quest ‘Dead Hand of the Past’, where Declan Leuvaarden requests that Geralt buries his friend in the crypt beneath Reverand’s church. While burying his friend, the King of the Wild Hunt appears before Geralt, where the King reminds Geralt of past times and Geralt’s destiny.

The Wild Hunt in The Witcher 2: Assassin of Kings (Game Spoilers)

The Wild Hunt does not appear in the Witcher 2, however they are mentioned in a book where it says that Yennefer of Vengerberg, Geralt’s lover, had been abducted by them, though she did not stay with them unlike Geralt who was with them for a while.

It also describes what the Wild Hunt is, and the many theories about the Wild Hunt, such as the Wild Hunt being spectres of knights who have died in other worlds, and that they were created by an evil force that sends them to different worlds in search of slaves.

The magicians in the game have differing opinions about the Wild Hunt, with Dethmold believing that they are nothing but a myth, Síle de Tansarville wanting nothing to do with the Wild Hunt and remaining silent whenever asked about them (which surprises Geralt because she is an extremely smart sorceress and he thought she must know something about them), and Philippa Eilhart has her own theory about the origin of the Wild Hunt however we do not find out what this is because it’s mentioned as a ‘shallow theory’ and not worthy of being wrote down.

What To Expect in The Witcher 3: Wild Hunt

Throughout the Witcher games, the reason the Wild Hunt has been searching for Geralt is because they are desperately seeking Ciri, and Ciri makes her debut in the Witcher games in The Witcher 3: Wild Hunt. This is why they play a major role in the next game, and why they step up their desperate search for Ciri. They believe Geralt knows where she is, hence them seeking Geralt in order to get to Ciri.

The Wild Hunt will continue their search for Ciri during the next game, and they will also come face to face with Geralt, as seen in the Elder Blood trailer.