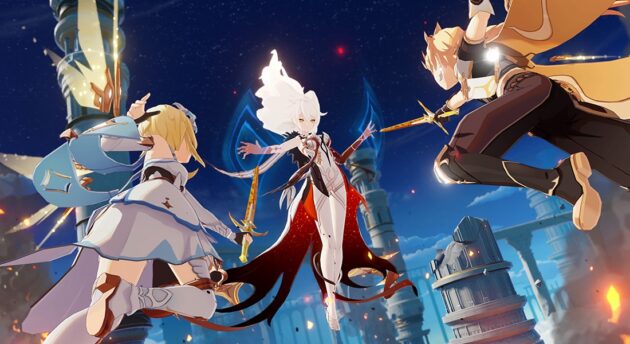 Genshin Impact is influenced by Nintendo’s The Legend of Zelda: Breath of the Wild. However, Genshin Impact differs from other video games in terms of inventive gaming mechanics and endearing narrative passages. Besides that, special events are offered each month and other content.

This game is free to download and play; however, it demands intense grinding to unlock powerful warriors. Despite that, Genshin Impact is a truly enormous, extremely well-polished, and constantly-expanding game for you to enjoy without spending a penny.

The main plot of Genshin Impact is on a visitor from another planet who shows up out of the blue in Tivat (land), a place where seven nations are aggressively fighting for dominance. Here, the real-world equivalents of each region may be found: Liyue is roughly equal to China, Snezhnaya to Russia, and Mondstat to Germany. You’ll frequently get the opportunity to engage in combat with or enlist these immortals granted flesh because each of these is controlled by an elemental god.

The characters are all rich in personality, and the localization is excellent. However, Genshin Impact’s compelling you to perform additional tasks in between story segments slows down the narrative pace despite its original and entertaining plot. Additionally, they give you the flexibility of switching between playable characters at practically any time, which creates startling situations in the game, but it really breaks the immersion.

Tivat is ruled by seven main elements, and all the characters are allied with a specific aspect and kind of weapon. However, the seventh one, named Dendro, which deals with plants and has not been fully developed yet, so you will mostly just need six of them. So, to win the battle, you can consider making a group of characters with diverse abilities. as according to the intensity of the battlefield, you can frequently switch out your fighting team of four active party members, which is a plus point.

Genshin Impact’s elemental combat system offers a lot of different ways to approach a problem, making it maybe the most rewarding feature of the game. For instance, if you are fighting several monsters in the rain, you can first freeze them before electrocuting them for more stats and damage debuffs. At first, there is a lot to keep track of; however soon, you will be rapidly switching between your four members to offset all of these elemental combinations. If you enjoy tinkering with individual builds, then you will love playing this game because there is a lot of satisfying complexity to be found here as there is so much open-ended strategy to be taken in.

Navigating the game’s UI may be a genuine hassle. Checking your Battle Pass, going to an Adventurer’s Guild location in one of the game’s major cities, or clicking through different tabs in the Adventurer’s Handbook submenu are all requirements for some mission prizes, and the list goes on. So it would be better to make use of a laptop suitable for battlefield games for a smooth gaming experience.

Although Genshin Impact is completely free, the game’s “gacha” model, often known as the loot box, has various varied scenes. It tempts you to buy randomized characters, treasure, consumables, and other items with real money, as well as in-game currency. The ecosystem definitely makes errors on the side of pay-to-win, but it strikes a good balance that allows people who do not wish to spend any money to still play the entire game for nothing.

Although all the most potent weapons and characters may be obtained right away by paying enough money. You could unlock all by using the given free currency to get fortunate or by playing for more than 120 hours in a row without spending any money and grinding them out.

The real issue with this gacha model arises in the final phases of progression, where upgrading materials becomes a tremendously relatively steep climb and activities that benefit those items become a major progression roadblock that could be elevated for the right price. Any time you encounter one of these obstacles in Genshin Impact, you can be sure that a pop-up will appear to inform you of how to get through it. Almost every item in the game can be purchased with enough assistance from your pocketbook.

Summing up the article here, we hope the above Genshin Impact game review might have helped you gain some valuable information about the game. The way it combines elements of Breath of the Wild with vintage JRPGs is fantastic, and the fact that the game is available for free makes it completely worthwhile to play. So, if you love video games with such a storyline and features, you must go for it. Try it at least once; you never know, you might love it.

Follow us and get the latest news delivered to your timeline!
Genshin Impact game
Previous ArticleMinecraft 1.20 update will bring camels and bamboo to your worldsNext ArticleFirst two Mario Party games are coming to Nintendo Switch Online