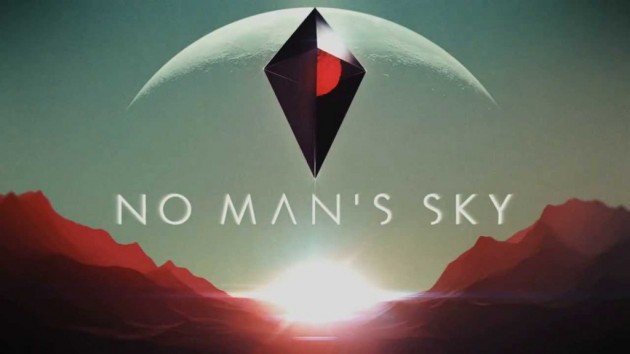 One of the most talked about games that smacked fans upside the head at last year’s E3 was No Man’s Sky. Developed by a four-man development team, Hello Games pitched their game in the most nonchalant manner possible. They promised a universe but showed just a sliver of it. Now, a year later, fans are still scratching their heads after watching Hello Games E3 presentation. Just what is it?

Well, good news, folks. I’m here to explain everything we know so far about No Man’s Sky.

Where Can I Play It?

Let’s talk platforms first. Which platforms the game would be released on was debating in contention. Although Hello Games mentioned we would see a PC release (since it’s the developing platform), many fans weren’t totally sure when we would see a PC release. Rest assured, though. We’ll be seeing the game release simultaneously on PS4 and PC with XBox One still pending.

Will There Be Multiplayer?

Another hotly debated feature was multiplayer. Will the No Man’s Sky have it? And if so, in what capacity? Will players be able to form parties with their friends? Will they have to find each other? What’s the skinny?

The short of it is that multiplayer does exist. You will share this galaxy with hundreds of thousands (millions?) of players, but you won’t have the capacity to see all of them at the same time. Plus, the size of the galaxy is set to scale. This means that it’s absolutely massive. Simply zooming out of the map is ego destroying because it emphasizes how minuscule every planet and star is in the galaxy.

So, while it’s possible to eventually find your friends and roam around in groups, you won’t necessarily be forming parties. It’s just not the point of the game. The game isn’t an MMO, there won’t be PVP, base building, or anything like that. The idea of the game is exploration, isolation, and self reflection. Okay, maybe not so much self reflection, but you’ll be terribly alone. Hello Games created the galaxy so players would be able to mark their paths by naming planets and their inhabitants.

That said, there are definitely some social features built into the game on a limited level. For instance, you’ll be able to see where your friends are in the galaxy, and you can leave messages for other players in certain places. Truth be told, a lot of the multiplayer details are still wrapped in a shroud of darkness. 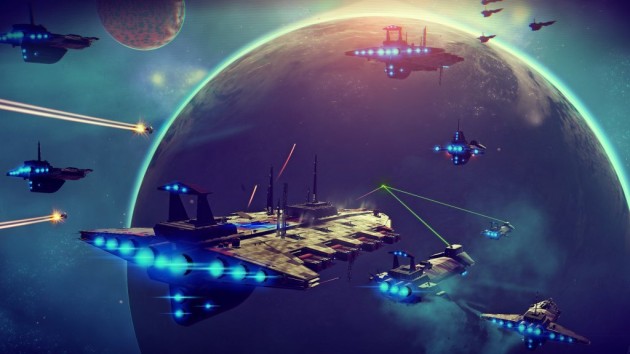 Everything in the game is procedurally generated, but an important distinction to make is that the game isn’t random. All of the assets have obviously been worked on heavily and the team actually sends out probes into the galaxy to act like their eyes and ears. These probes exist to observe how their algorithms shaped the galaxy, and the developers have gone in to make sure that there are never too many of the same things nearby.

Procedural generation doesn’t end with planets, though. The developers’ algorithms extend all the way to the weapons, items, ships, and animals. The idea is that Hello Games really never wants you to see the same things twice. And if you do, they want to make sure they’re spaced out so far apart that you’ll forget you ever saw it to begin with.

The galaxy will be shared with all players but everyone is going to start off in their own solar system. The good news is that the developers favor fun over scientific accuracy, so you won’t be exploring wholly empty solar systems on your journey to the center of the galaxy. Each solar system has something significant in it that is shared among all players.

Planets themselves will be a bit empty. According to The Verge, each planet will only have a 10% chance of having life on them and most of the life will be very primitive. The idea is that when you find a planet that is lush with life then it will be remarkable and memorable to the player.

The gameplay is where things begin to get a bit convoluted, and that’s mainly because we haven’t really seen what all it has to offer in a concrete sense. Just isolated details here and there that we can put together to draw conclusions. Any facts stated here are rooted in truth, but inferences are just that.

The most interesting thing about the game is that there are no quests or missions outside of getting to the center of the universe. Instead, the player is tasked with creating their own adventures along the way. Not having quests isn’t to say that there aren’t things like jobs you can have in order to net units (the in-game currency).

As you play through the game you’ll obtain resources by killing animals and mining/gathering items on planets. The game uses this weird alternate periodic table that the developers have created and you’ll gather relevant resources to help upgrade your ship and your gear. Recipes for things like this will feel very much like Minecraft because you won’t know any of the recipes going into the game.

An interesting discovery in this year’s E3 demo is the introduction of a GTA styled wanted level. There are essentially space cops posted on every planet and if you go around causing havoc and being reckless then you’ll start to accrue wanted stars and have these space cops come gun you down.

A lot of people coming back from the demo have described the game somewhat like a mixture of EVE Online and Minecraft in the way that the economy and crafting work, respectively.

Gameplay of No Man’s Sky 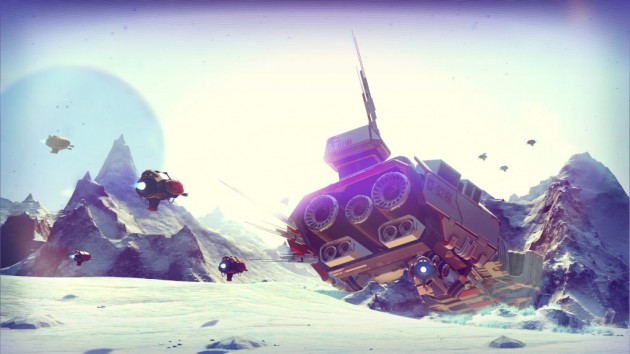 If there is one thing we have seen, it’s gameplay. We’ve seen demos where players are able to seamlessly transition from space into a planet’s atmosphere and then simply land on the ground.

Combat does play a role in the game and can define who you are as a player. You can, unknowingly, be affiliated with factions that exist in the galaxy, but there won’t be any way for the player to accurately judge who favors or dislikes you. This is all determined by how you treat members of these factions. If you go out on a rampage against a certain faction then it’s very likely they’ll begin to attack you on-site. On the flip side, aiding various factions will allow you to call wingmen from these factions when you need aid.

As stated above, there are jobs in the game, though they mostly revolve around trade. And since your ultimate goal is to end up in the center of the universe then it’ll be unlikely that you stick around working a stable job outside of funding necessary upgrades.

As you make your way to the center of the galaxy you’ll notice better quality gear to acquire. An interesting thing noted in the Giant Bombcast was that the rules of the galaxy mirrored what we were familiar with on the edge of the galaxy, but as players begin to move closer to the center, the behavior of the galaxy changes. Unfortunately, details about this were left vague.

That’s going to wrap it up for the larger details, but part 2 will be up soon and will go in depth with smaller details regarding ships, combat, and more.