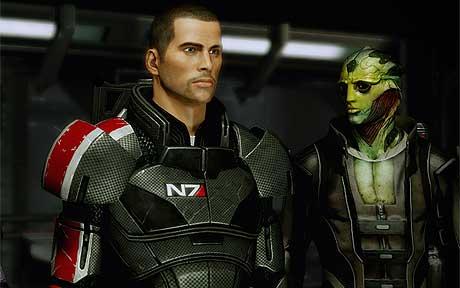 EA kicked off it’s press conference with footage of Dragon Age: Inquisition. The sizzler reel featured some stunning vistas and a lot of pretty character models walking around, but nothing in the terms of true gameplay. They then discussed how the new entry will bring see the return of a deep party system, customizeable characters and a semi-open world. Next the team showed off some actual gameplay, which revealed that the tactical mode, in which players can freeze time and plan team movements is coming back.

Next the team revealed a new entry into the Mass Effect series as well as a brand new IP. The new Intellectual property looked to be set within a post-apocalyptic world based on one piece of conceptual work. The Mass Effect entry appears to be a less story driven experience, instead focusing on discovery and exploration. They assured that characters would still play an important role in the game. The conceptual images will soon be added to the piece so you can judge for yourself.

Follow us and get the latest news delivered to your timeline!
2014BioWareDragon AgeE3gameplayInquisitionMass EffectNewtrailer
Previous ArticleRise of the Tomb Raider RevealedNext ArticleNew Criterion Game is Open World Traveler