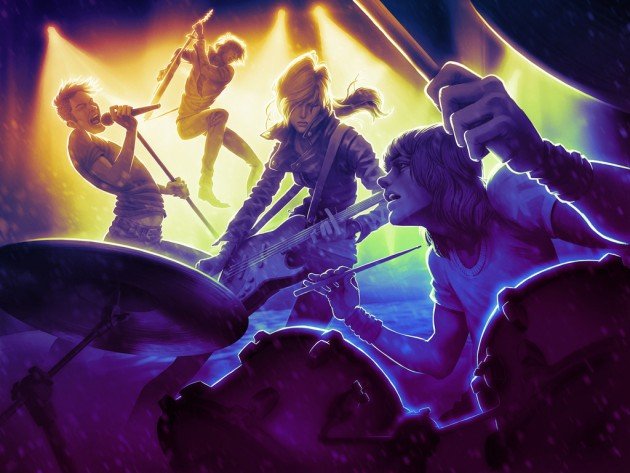 Rock Band 4 is a 2015 music video game developed and published by Harmonix. Rock Band 4 allows players to simulate the playing of music across many different decades and genres using instrument controllers that mimic playing lead and bass guitar, drums, and vocals. As the fourth main installment and the 7th major console installment in the Rock Band franchise, it was released for PlayStation 4 and Xbox One on October 6, 2015. Mad Catz, who also developed new instrument controllers for the game, marketed and distributed the title worldwide at launch; Performance Designed Products (PDP) took over manufacturing and distribution by the end of 2016. The game shipped with more than sixty licensed songs; additional songs are available as downloadable content, which includes a library of over 2000 existing songs from prior installments.
This music video game represented Harmonix’s return to the franchise after an almost three-year hiatus, following the diminishing popularity of the rhythm game market that started in 2009. Announced on March 5, 2015, Rock Band 4 refocuses on the core gameplay of the franchise, reducing the emphasis on musical instruction that was employed by its predecessor, Rock Band 3 while emphasizing the game’s social interactions, as well as new features enabling players to incorporate improvisation into their performance—such as “freestyle solos” on guitar, and “freeform melodies” on multi-part vocals. source: Wikipedia
Initial release date: October 6, 2015
Series: Rock Band
Developer: Harmonix Music Systems
Designer: Alli Tresher
Publishers: Harmonix Music Systems, Mad Catz
Platforms: PlayStation 4, Xbox One
Modes: Single-player video game, Multiplayer video game

Guitarists, musicians, and anyone who plays music and video games know the Rock Band franchise and that its latest entry, Rock Band 4, is approaching so developer and publisher, Harmonix, continues to drop some big names, such as Aerosmith and Paramore & Foo Fighters, that are included in the games’ tracklist.

The 11 new songs added to the previous 11 are listed below:

Rock Band 4 is going to release on October 6 for PS4 and Xbox One. ( Via: Videogamer )