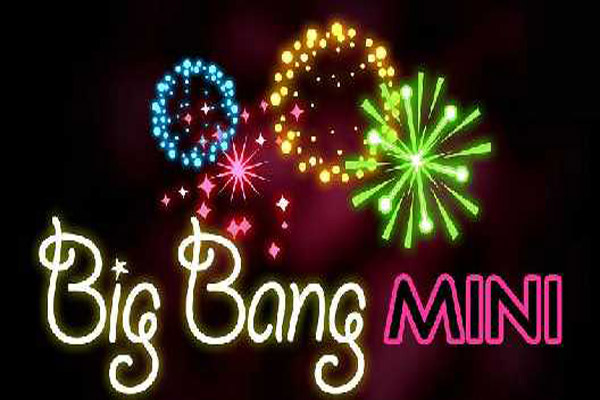 The retrotastic shoot ‘em up is one genre that will never go out of style. Among certain indie developers, there’s a real passion for producing sumptuous 2D art which does such games the world of good. There’s a timeless quality to the gameplay of Asteroids, Space Invaders, Galaga and their ilk, which just needed a dash of 21st Century sexiness.

What you have before your very eyes right now is a psychadelic shooter with fireworks. Literally, you are shooting fireworks at any array of marauding aliens/skeletons/leprechaun-freaks. It’s mad, it’s great and it’s bright as balls, so sunglasses at the ready and we’ll take a closer look.

Big Bang Mini was released on the Nintendo DS in 2009. It’s entirely stylus controlled, and your objective is to send your colourful missile from the bottom screen to the top with a well-aimed flail of the touchpen. Early in the console’s life, this kind of crap was merrily shoehorned into many games, but it feels right in this case. All kinds of right.

Fair warning, though: the gameplay is a little more complex than your standard-issue SHOOT EVERYTHING IN THE FACE WITH YOUR SHOOTY BULLETS OF PAINFUL PAIN. As you may know, fireworks have a tendency to… freaking well explode. As such, the debris from your shots will rain fiery vengeance back down onto the touchscreen, endangering your own ship. This mechanic adds an extra challenging dimension to the gameplay, and it also discourages mindless shot spamming.

But don’t think this makes it all cerebral and think-y. Big Bang Mini is, first and foremost, a ridiculous riot of colour. The Arcade Mode takes you from Rio De Janeiro, to New York, to Paris, to the African savannah… in space. Each ‘zone’ has its own crop of stages, and is populated by peculiar neon enemies and some of the nuttiest bosses you ever saw.

In this budget buy, you come for the cartoon crazitude and stay for the generous bounty of game modes. The main campaign aside, you can also try your hand at various challenges, the single cartridge multiplayer, or the Mission mode. After that, you can enjoy Relax Mode, which is simply a fireworks display which you can control yourself or automate. As the name suggests, it’s a calming end to a nutty Big Bang Mini experience.