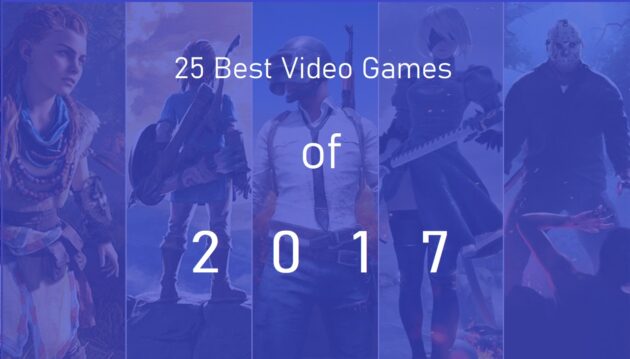 2017, an incredible year for video games, was also a difficult year for our backlogs. Games may, of course, be addicting, base, and ignorant. But the brilliance of games in 2017 is clear proof that games now mean so much more to so many more people than they ever have before. Thanks to the number and variety of experiences available. We all have played many different games in the past, but below are the 25 best 2017 games.

Despite its flaws, prey retains some of the vibes of the old-school single-player computers that Arkane and Bethesda have become known for. Prey pulled all the right strings as a game filled with fantastic adventure and riddle. This is our 1st pick for the 25 best 2017 games.

The excellence of Injustice 2 just overwhelmed us all. This single-player game is more exciting than the fighting game I have played for ages. And it should be in 2nd place for the 25 best 2017 games.

Despite moving from the franchise’s roots in many significant ways, Resident Evil 7 biohazard proved to be the most horrific game of the year. From start to end, this is exciting to play. It is one of the best 2017 games.

Because of its enthusiastic fascist-killing, it’s easy to promote Wolfenstein 2: The New Colossus in 2017. But it is at the game’s feminine center that the game’s true significance rests. In this game, Women are treated equally as strong, powerful, and persistent.

PlayerUnknown’s Battlegrounds spent the whole of 2017 in early access and is just arriving on PC this week. The ‘battle royale’ game sets 100 players against one other in a high-stakes last-man-standing struggle across a massive battlefield. Go ahead and try it out.

Mario + the Rabbids Battle Kingdom proved to be one of the year’s exciting games. The combined effect of XCOM-style Switch battle and Mario and Rabbids’ zany regions yields in a surprisingly intriguing and interesting video game.

In the standalone Uncharted 4 expansion, Nathan Drake was replaced by two female characters. At the very least, it demonstrated that the series could stand on its own without its wise-cracking lead.

Destiny 2 appears to be the most generic of video games.  Destiny 2’s vibe sets it apart from its competitors. Every action and sound reaches the brain as if it were real: the glide of a double jump, the sway of the rifle, the sharp thwack of a melee attack.

Sonic Mania brings back the classic Sonic. Since its golden days, the Sonic franchise has suffered from a string of disappointments. It’s also fantastic to play a Sonic game on the Nintendo Switch, which is undoubtedly the best-looking side-scrolling Sonic game.

Cuphead is a very simple game. You have to run, jump, shoot, and parry. Cuphead is good as a retro-styled action game. Cuphead, on the other hand, is so high due to its visuals and music, which make it feel like an interactive 1930s cartoon.

The sequel to The Stick Of Truth isn’t as inventive or amusing as the first. Overall, a fantastic little South Park RPG that captures everything of the show’s humor and satire.

Ninja Theory game was as surprising as the best 2017 games. The audio design is worth checking out, but when you add in the fighting and voice acting, you’ve got yourself a surprisingly strong AA game. If you prefer more experimental games, this is well worth your time.

WWII has proved to be one of the most divisive releases of 2017, as it is the first Call of Duty in historical years. That’s hardly surprising that Call of Duty is frequently both the best-selling and the most generally mocked game of the year.

In Lone Echo, the player is constantly rewarded with discoveries. Every interface in the game is physically displayed, frequently via a wrist-mounted display that feels fantastic every time you use it. Pushing oneself off barriers to move through zero gravity is known as traversal.

A lot of games compare dark Souls. But it’s a good analogy for Nioh, which might easily be compared to Samurai Dark Souls. The demonic action RPG sets a Geralt of Rivia clone against the enemy’s hordes.

Nobody should skip out on this fun and challenging side-scrolling action game from the best 2017 game. The Metroidvania-style game has exploration, platforming, and combat. It also has stunning graphics and a terrific soundtrack.

Nier Automata is a unique game played for a long time. Excellent fighting and world-building, and incredibly clever perspective adjustments. It is a truly excellent action game with an original design and engaging storyline.

The decision of Ubisoft to take a year break from the Assassin’s Creed franchise paid out well. Origins are, without a doubt, the greatest game in the series. Origins, set in ancient Egypt, depict the story of the Assassins and Templars. It’s fantastic and an innovative game in a brand that had become stale.

Divinity Original Sin is one of the iconic classic video game, and its all interesting features that made the game great is included in Divinity Original Sin 2. A fantastic adventure with great features, fabulous gameplay, and lots of laughter that holds laughing and smiling the entire time.

Cuphead is one of the year’s most striking games, thanks to its combination of extremely difficult platforming, graphic style, and soundtrack. It is the best Xbox 1 game of the year. If you haven’t yet played Cuphead, please do yourself a favor and do it now.

Horizon Zero Dawn was consistently mentioned as one of the favorite games of 2017. Guerrilla Games’ first effort into a third-person open-world action RPG is mind-blowing, especially considering how well it turned out. It is a game with a surprising depth in plot, acting, and design.

Super Mario Odyssey was a game that everyone enjoyed practically every minute of. There’s a new place to explore, a new puzzle, a new challenge, and a new hidden mystery around every turn. Odyssey is without a doubt one of the finest Mario games ever developed.

in Atlus’s long-running JRPG series, Persona 5 is the latest entry. It is stylish, sleek, immensely deep, and completely different. You should go ahead and play it!

24. The Legend Of Zelda: Breath Of The Wild – Nintendo

Breath of the Wild is so good, innovative, different, and fresh that it’s changed everything we thought we knew about Zelda and open-world games in general. There are a lot of fantastic achievements in this game design that will be one of the most important games of our age.

It’s easy to relate to how Night in the Woods handles friendship in the face of self-loathing.  You play in a band, do some bottle-breaking crimes, and party in the woods in between meeting up with pals and investigating a severed arm discovered in front of a cafe. We decided to place Night in the woods in the 25th place in the 25 best 2017 games list.

Follow us and get the latest news delivered to your timeline!
best video games of 2017
Previous ArticleKeywords Studios expects to have earned over $570 million in 2021Next ArticleWhat is the initial release date of Hidden Deep?