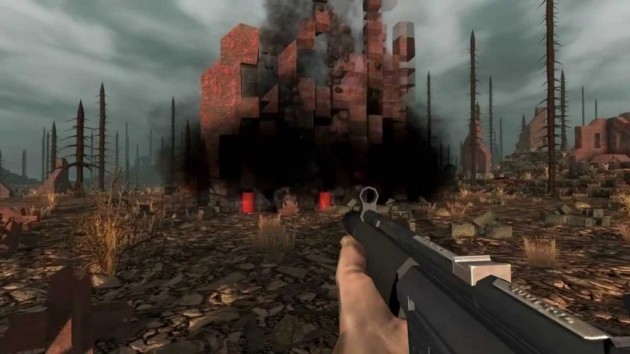 If you have read my previous articles about the zombie survival crafting game 7 Days To Die, you’ll know that I have in the past, warned players of the exposure to insecure multiplayer lobbies and recommended private solo or co-op play. I recently stepped into the realm of this hacker demolished, stranger infested world and thought I’d share my recent experience and warn the fellow survivors out there on just how relentless this world can really be.

I joined a lobby in which I was greeted by a few friendly survivors in the chat, things started off pretty well. I was skeptical at first, seeing as it was my first day, I had minimal resources but because it was early days I thought to myself, “little to lose, much to gain…”

After some distant looting and friendly chatter, I met up with the survivors who escorted me to an enclosed location hidden by a sea of maple trees which were planted personally by themselves to shelter their home from unwanted persons or hackers. On my journey to this location I finally saw what hackers were capable off when passing buildings that were completely obliterated, rubble and materials scattered all over the place along my travels. If there was one positive outlook I could take from it, it kind of made the world look that much more run down in the event of an apocalypse.

When we arrived their base was this enormous iron and concrete blockade that stretched over a stream, surrounded by rows of reinforced log spikes. It was essentially an impressive exterior that masked its real interior which was actually an underground shelter that burrowed deep into the earth for miles. They declined entry which I understood completely, I didn’t really want to go inside anyway as I didn’t trust them all that well either. They supplied me with some food and water and other supplements and I thanked their generosity. It was better to be on their good side and they seemed like a friendly bunch so I asked if I could set up camp nearby which they agreed to.

Over the course of the next few days I began building my little shack on the outskirts of their forest and planted my own trees to mask my own. I had built a wall to enclose my garden and I was at the height of my self sufficient lifestyle. The nights were tough, I’d got into the routine of shutting off all the light from torches and campfires and had to sit quietly in my shack while listening to the herds of running zombies pass by, each time hoping they wouldn’t sense me and begin tearing down my walls.

Things were going good for a while, I made friends with a guy who lived a stone’s throw away on the other side of the nearby lake. We exchanged items, helped build our homes and even went on scavenging trips together, but then things started to change…

After a while I noticed that these friendly players weren’t online as often, I sometimes wouldn’t hear from them for a week and the population of unfamiliar survivors joining the lobby was increasing. One night I had logged back into the server to find that my home had been completely ransacked, most of my supplies were gone, a hole in the roof leading to piled dirt on the exterior of my home all pointed in one direction, I’d had a break in while I was away…

One late afternoon I was startled by the sight of two unfamiliar stragglers wandering the fields nearby. I was some distance from my home but it was in sight, they stood between me and my shack. I kept my head down but one of them spotted me, I tried to run for the hilltop and circle my way around but I didn’t stand a chance against their sniper rifle.

I had been killed for the first time, we were weeks into the server, Day 42 if I recall correctly. When spawning back in my bedroll I popped my head over the wall, they were moving off into the distance. At this moment I was blinded by sheer rage and drained from the solitary despair of going through it alone for over a week. I ran over to my backpack, no… could it be? They had taken only my guns and ammunition. It was late, nightfall would soon come but I sought revenge at all costs.

Equipped with only my knife and crossbow, I trudged through murky rivers and scaled steep valleys tailing them, hoping they would lead me back to their camp, all while avoiding contact with the masses of scattered zombies and dogs around me. For a moment I thought I had lost them, but then I heard the distant clanking of a forge. I followed the sound, narrowly escaping the clutches of the undead until I stumbled across a walled off area with four tall apartment complexes within its walls. This was big, not as impressive as my deserted friends’ underground design but of a similar scale. That’s where I spotted one of them across the fields, eyes down his sights but not at me, I took aim, I had to make the shot count so I waited for him to remain still, I took the shot, instant death.

With no sign of his buddy I began looting his bag and taking his rifle among other necessities to fuel my thirst and hunger, I marked the location on my map and returned home. I had become as bad as they were, a thief among thieves. The following morning I went to their location, the player had left and this was my chance to retrieve the rest of my belongings. As I broke into the premises I found most things to be locked and I all I could take was their corn and potato field they had planted on the roof. Another player joins the came, I immediately hear movement outside and it turns out this base doesn’t belong to my enemy but rather another victim of his devious thievery…

I had to leave my home behind after it had been further destroyed by more looters and thieves. I went on to scour the world alone with limited resources, ultimately leading to multiple near death experiences and the harrowing experience of wandering the world alone.

It’s amazing how another person’s actions can cause you to change your way of behavior, especially in a video game, where their behavior has no real consequence to their life and to see the lengths people will go to to get what they want. This is one of my many experience in the world of 7DTD that made me feel like I was living out an episode of The Walking Dead and other popular cult apocalyptic movies. It was then that I truly learned the meaning of the show’s Season 3 slogan ‘Fight the Dead, Fear the Living.‘