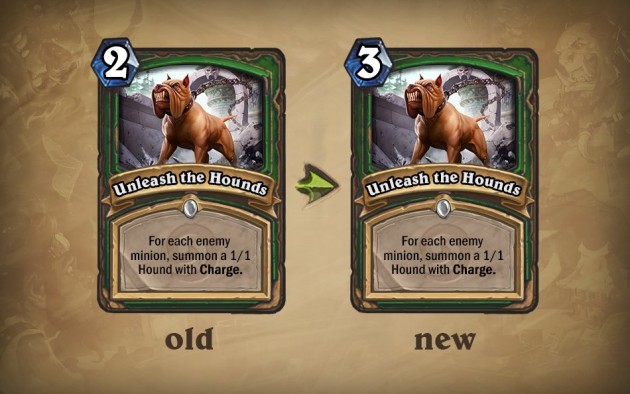 Blizzard are working hard to make sure that Hearthstone is as balanced and bug-free as possible, so they released a brand new update for the game. Update 5314 brings in a lot of improvements, including balance changes to the Unleash the Hounds card (and otherwise very popular and powerful card). We are here to share with you the complete change list in case you want to know everything that’s new under the game’s hood.

– Improved friends list sorting based on player status.
– Breaking News will now properly be shown when Hearthstone is undergoing maintenance.
– Reconnect functionality has been enabled for Practice Mode.
– Games in Friendly Play now have a turn timer.
– [iPad] Deck Rename and Deck Delete is now easier to find.

– Winning a game as Lord Jaraxxus will now properly grant credit towards unlocking the Warlock golden hero. You win… BUT YOUR WORLD IS STILL DOOMED!
– Returning an opponent’s minion to their hand will no longer occasionally leave behind a facedown card on the game board.
– Resolved issues that prevented the Fireside Friends card back from being properly unlocked under certain conditions.
– [iPad] Resolved an issue that was causing a client crash when choosing between two options of certain Druid cards.
– [iPad] Resolved an issue where new chat notification bubbles would appear behind the keyboard when in the chat window interface.
– [iPad] Adjusted the location of where enlarged versions of cards appear so that they are easier to see when selected.
– [iPad] Resolved an issue where the client may sometimes use the incorrect default language.
– Other bug fixes and UI improvements.

So clearly the biggest change brought in by this 5314 update in Hearthstone is the Unleash the Hounds card. How do you feel about it?

Follow us and get the latest news delivered to your timeline!
BlizzardHearthstoneHearthstone update
Previous ArticleRisen 3: Titan Lords Trailer Brings the Threat from UndergroundNext ArticleNew Dragon Age Inquisition Screenshots Tell Us to Hold the Lion