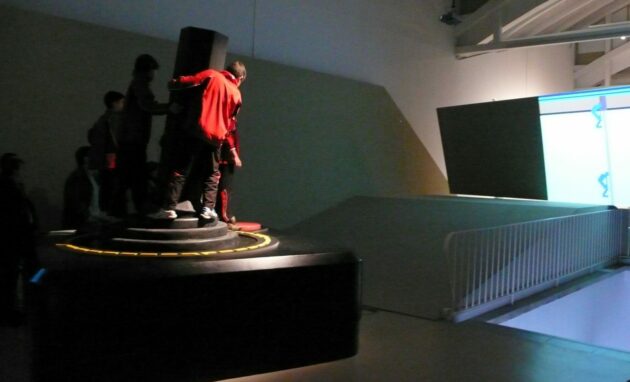 Mary Flanagan was the very first person who thought about finding a way to make random people play the game with each other in 2006. She came up with a solution to build a video game Atari joystick that is 9-foot in height. This joystick was made to the Guinness World Records 2022. This is ‘wow’ online gaming news.

According to Flanagan, this controller is around 14 times bigger than an original CX40 controller by Atari joystick. The materials like rubber, steel, and wood are the main materials of this joystick. House of Technologically Termed Praxis owns this product. You can find this Atari joystick in the ZKM Center of Art and Media, Germany.

The basic idea because of which Flanagan decided to build such a thing was to make something so big that many people would work together to operate it. Flanagan collaborated with fabrication experts from Brooklyn Navy Yard in New York to give reality to this idea.

Flanagan said while talking to CNN that even moving this controller is hard. She also said that storing this piece of equipment was also a challenge. She sometimes had to store it in some far-off place if there was a long gap between shows.

You can use this Atari joystick to play classic Atari games like “Centipede” and “Breakout,”. The only cons of the size are that you need a partner to operate this huge Atari joystick. However, a short version of Atari is also available inside the joystick. Flanagan mentions that the joystick could be connected to anything. Flanagan said it is hard to score high using this joystick as people don’t move their whole bodies fast enough. Furthermore, keeping good coordination also slows people down. But all this alters our perspective about the games, and we can overcome these challenges by practicing together.

Flanagan started her career as a game designer in the 1990s. She was also the creator of “[domestic]” known as the first autobiographical video game. In addition, Flanagan is the author of many books related to video games. As a result, she has a better understanding of the digital culture and how to use it to highlight the issues of society and change situations through video games, and that’s exactly what she did by building this joystick.

Flanagan was not expecting to be featured in the Guinness Book of World Records. However, the biggest goal Flanagan had other than bringing random people closer was defamiliarizing the parts of their everyday life.

For the time being, Flanagan is involved in developing a “feminist Artificial Intelligence”. The main purpose of this program is to only involve the work of women artists. This is to find out the biases present in the algorithms. However, Flanagan believes that the project she is working on, the joystick and video games, can become an essential tool for increasing meaningful interactions between strangers.

At some point, Flanagan stated that, in her view, games are small universes. She also stated that we can create a lot of possible futures in these universes. Then she added that she had a firm belief that one day we will be able to recognize the power of games and will be able to break barriers and interact with each other through games.

Follow us and get the latest news delivered to your timeline!
Previous Article“Stay Safe” launched to spread awareness about public safety in DubaiNext ArticleHow online gaming has become a social lifesaver