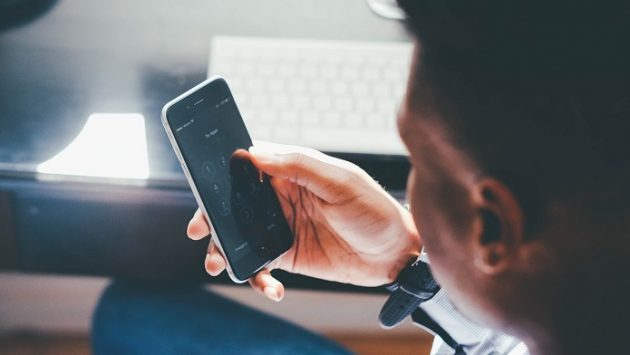 Do it with your Phone

It wasn’t so long ago that a telephone was primarily a device used to conduct two-way voice communication. However, a recent Gallop reveals that phone calls now take a backseat to other forms of communication on the smartphone among Millennial users. As you can probably guess, this demographic’s preferred method of communication is via text, email, or video chats.

Though we take it for granted now, no one ever expected that the phone would be used primarily to type out messages on a tiny keyboard with no actual buttons. Think about how crazy that sounds. We can initiate a phone call by literally telling our phone to place a call. Yet we would rather awkwardly tap out messages on a flat screen.

The crazy goes even deeper than that. We don’t even have to type out the message. We can dictate our messages and have them transcribed better than autocorrect can handle our typing. Yet we still prefer to send our messages in the most difficult way available.

So what else are we doing with smartphones today that no one would have guessed 20 years ago? You only need watch a TV show made before 2007 to get a sense of it. You see the characters doing things that make no sense in the modern smartphone era. Here are a few more things those scriptwriters never anticipated:

Even now, it is still hard to believe that some people are using their smartphone as a professional camera. Several years ago, Apple started seeding newly announced iPhones to fashion and sports photographers. Those efforts would appear on magazine covers and inside those magazines as elaborate spreads.

It was all fun and games until a few years ago, when iPhone cameras became so good that mainstream newspapers started replacing the photography staff with iPhone-wielding reporters. iPhones were never intended for that purpose. Even Apple didn’t expect that to happen.

That is why professional photographers rocking the latest plus-sized iPhone are having to use those BodyGuardz iPhone 8 plus cases as a means of protection. What they hold in their hands represents their means to their livelihood. Other companies are also capitalizing on the fact that professionals in challenging conditions are using smartphones in ways that were previously unanticipated.

There are reports that more video is being consumed on smartphones that big screen TVs. The smartphone has not just taken over television viewing, it has become our comprehensive entertainment machine.

When we want to go play with our way-too-expensive drone, we reach for the smartphone to control it. Pretty soon we won’t even be able to build a Lego playset without needing the phone for the augmented reality game associated with it.

Even before the iPhone, music was becoming an important part of the smartphone experience. But today, the primary way people listen to music is the smartphone, not the radio or with compact discs. Gaming consoles are still a big deal. But smartphones have become the #1 gaming platform by far. It is not even close.

When smartphones first hit the scene, they were all about work. They were glorified PDAs that could also make calls. The market was dominated by Palm, Blackberry, Nokia, and Microsoft. But when the general population got their hands on the technology, the primary use went from productivity to entertainment. And those productivity companies are nowhere to be found in the modern space.

In 2007, no one thought smartphones would be used as credible medical devices. Well, guess what? In some parts of the world, iPhones are being used for skin exams and eye exams. The Apple Watch, an accessory for the iPhone, has already saved lives by spotting abnormal heartbeats.

This fall with the release of iOS 12, the AirPods, when paired with the iPhone, will work as hearing aids for the hearing impaired. No one expected any brand of consumer smartphone to do anything of the kind. Yet medical professionals are finding more uses for smartphones, smartwatches, and tablets than just patient check-in.

You probably didn’t expect that your phone could help you find and meet your life partner through an app. It probably comes as a surprise that you can control almost everything in your home by telling your phone in plain language what it is you want to be done.

Not all that long ago, no one expected the smartphone to become a professional camera, or the everything entertainment machine, or medical devices that can prevent disease and save lives. If you didn’t see that coming in 2007, you’ll be blown away by what’s just around the corner.

Follow us and get the latest news delivered to your timeline!
flat screenGaming consolesiPhonesmedical devicessmartphonesvideo chats
Previous ArticleTop 10 Apps for IOS about Drone simulators and aviation gadgetsNext ArticleHow to Make SEO more Effective for Game Promotion?