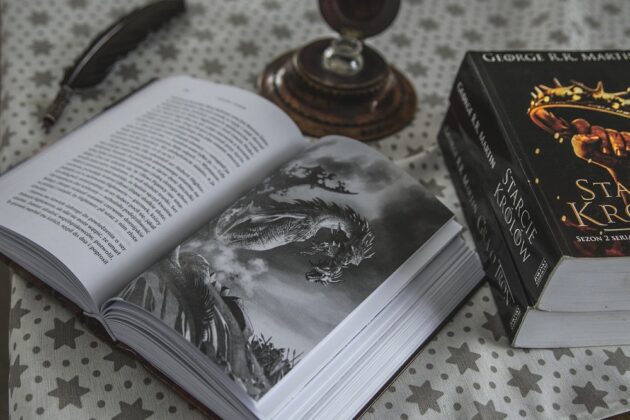 As engrossing as video games are, sometimes we all need a break from the screen. Rest your eyes and glance across this list of the best video game books. Spanning the early days of consoles in the 1990s to contemporary video game stories such as how studios like Rockstar developed the controversial GTA series, this list will engage video game fanatics of every era. The stories behind the games are often just as fascinating as the games themselves – read on to discover the eight best video game books.

From the world of video game development, Schreier draws an epic narrative about the hard work that goes into game production. Behind the finished product of any video game stands hours of labour and this book reveals the drama that goes into video game design. Schreier has worked adjacent to the gaming industry for years and he gets some of the biggest industry names to come clean about the truth behind the pixels in this dramatic tome.

2) Masters Of Doom By David Kushner

Vintage game lovers have been obsessed with Kushner’s fascinating biography of Doom’s designers. First published in 2003, Kushner explored the men behind the classic game and anyone who has played the groundbreaking first person shooter will love the detail with which Kushner investigates the lives and work of  John Carmack and John Romero. These two men ultimately shaped the future of video games with their innovative game, and the journey that Kushner presents, from misspent youth to software developers is an incredible tale.

Kushner followed up his 2003 masterpiece with Jacked, taking a look inside the rebel gaming studio of Rockstar and its development of another seminal classic, Grand Theft Auto. This long running series has been well loved by two generations of gamers – and two generations of media outlets have been panicked by its violent and criminal content. Kushner takes a deep dive into the development of GTA and discovers that the story of Rockstar Studios is no less exciting than the games they produced.

Clunes book is a personal account of how video games have changed and channelled the direction of his life, making this book part autobiography and part reflection on human identity. Clune, an atypical and introverted child, discovered gaming through an obscure PC game called Suspended as a 7-year-old, and it set him on a course that changed his life forever. Clune writes with great subtlety and understanding about the world of video games and what we can learn from these virtual environments, as well as providing an insight into how gaming can be an escape from an often cold and harsh reality that lacks understanding for those that don’t seem to fit.

The battleground of the early to mid ‘90s was the video game console, as technology expanded in leaps and bounds and the market grew to meet it. Sega and Nintendo became locked in battle to win over consumers, and this competition drove a surge in innovation and game design that ultimately gave us some of our favourite console games from the era. Harris explores the journey of Tom Kalinske, brought in by Sega in the early years of the great gaming battle to be their man on the front line.

Although the artistry that goes into video game design is equal to that of any Hollywood film and the cultural impact of video games stretches across generations and borders, critical analyses of the video game industry are sadly few and far between. In Extra Lives, Bissell sets out to redress this problem and casts a critical gaze on the significance of video gaming in our culture. Mixing interviews with industry leaders and searching investigative essays, this book reveals how important games are to contemporary identity in the 21st century.

7) The Tetris Effect: The Game That Hypnotized The World By Dan Ackerman

Created in 1984 by Russian game designer Alexey Pajitnov, Tetris took the world by storm and never really loosened its grip. This is an incredible feat for a game in an industry which is obsessed with innovation. Ackerman explores the history of Tetris’s development and the reasons for its spectacular success.

8) Reality Is Broken: Why Games Make Us Better And How They Can Change The World By Jane McGonigal

Veteran game designer Jane McGonigal knows the power of video games. In this fascinating book, she explores the far-reaching effects and demonstrates how video games can indeed change the world, in many surprising ways. From potentially revolutionizing effects on the professional world to education and personal development, the potential for video games has only been glimpsed at so far. McGonigal presents an exciting vision for the future in this book.

These books reveal that the story behind the games can often be as captivating as the games themselves. Whether you’re interested in gaming history or its contemporary impact on culture and identity, these video game books are must reads for the gaming fanatics. This impact looks set to continue as virtual and augmented reality technology is revolutionizing the industry. Time to log on, player one.

About Author: Katherine Rundell is a writer at Custom Paper Writing Service UK. She is obsessed with video games both vintage and modern, and her favoured console of all time is the N64.

Follow us and get the latest news delivered to your timeline!
Video Game BookVideo Game Books
Previous ArticleDisintegration lives up to its name as its servers are set to close next monthNext ArticleXbox acquires Bethesda and exclusive rights to eight major franchises

Guest Author
vGamerz Thanks to all our Contributors; Independent Writers, Journalists and Guest Bloggers for helping the site to became better with good an engaging content and for keeping our readers up to date with the most recent updates about all types of online games.