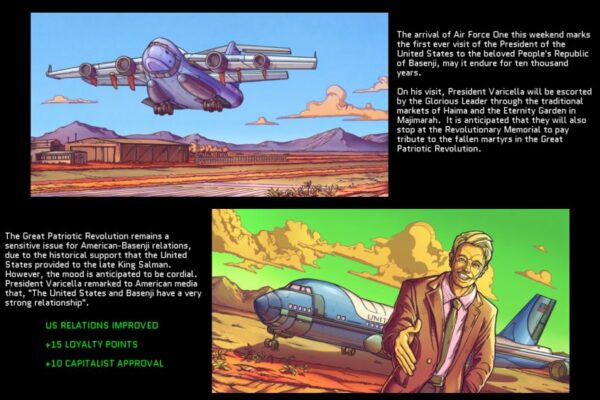 I’ve been playing a lot of Rogue State lately and I loved every failure of mine more than the previous – but that kept me playing over and over again, trying to counter my brother Farouk, gaining the trust of my people and building the country up. It’s not always a breeze, it’s not always easy – on the contrary, but it’s doable. And I am here to help you get better at the game and be the ruler/president or dictator (whatever you want to call yourself) for longer and even beat the game. For that, I have prepared some Rogue State cheats and tips for a complete strategy guide.

The game is extremely complex, despite the initial thoughts you might have on it when you start playing. Therefore, there might be a lot of the more advanced strategies and concepts that won’t be covered here, but the basics and tips to win will be here. And if you won’t win, yow will at least last longer as a president and get a better score. So let’s not waste time and let’s check out below some Rogue State tips and strategies!

How to choose the right ministers/cabinets
Every time you start a new game, you must select four out of five cabinets – and place Farouk in one of them. Farouk will sabotage you so no matter where you place him, he’ll try to do some harm. I would personally suggest placing him as the Intelligence minister, which will reduce your chance of Breakthroughs to 25%. This is the best bad effect possible, maybe seconded by the Financial Minister which will cost you 5M per turn. Getting money is relatively easy in the game too so the 5 million won’t really make a difference, but they can count. So I always go with the Farouk as the Intelligence minister.

Export, don’t import!
Every time you start a new game, random resources/goods will be generated: you will always have two, and the three neighboring countries will always have two. Some resource combinations result in different bonuses and you should check them out at all times to know that you have the option to get to them (if you actually have that option), but otherwise I would suggest to focus on exporting your goods and importing nothing. The money you spend on trade is better used to rebuild your country and the bonuses and boosts you get are, usually, not worth it. The best part? If your country’s resources can pair up and give you a bonus, you will still keep it even if you export your goods.

How to make more money in Rogue State
One of the most important things you have to worry about is having a ton of money on your hands. There are a lot of ways to make more money and the building-related ones require some planning. There are also taxes which can be used to give you a boost (or not) of income: tax rates can go up to 19-20 percent without having a huge negative impact on the population and they can even go up to 25-27 percent if you really need some extra money, but there will be a big penalty. The good news is that the penalty will change over time, so the negative effects will be lower after a few turns and you can counter them at least partially by lowering taxes after a few turns.

Taking advantage of the capitalists will also guarantee a lot of money. I found that keeping Capitalists happy is the easiest in the game, and if you can reconstruct and build the Global Shipping Giant feature, you’ll get a ton of extra money each turn if you keep the Capitalists happy. And that does help a lot!

The Policies
Paying attention to the policies and being able to crack them is the key to victory in the game (combined with smart money-making). It’s really difficult to tell how exactly policies work because there’s clearly more to them than what you can see in the game info screen and they affect the game more than just in terms of raising or lowering your people’s approval ratings. They also influence possible events and how things are going in the country. And remember: you can’t keep everybody happy, just make sure you don’t get them too low or they will start rioting and it will be really difficult to recover from that.

I have a strategy regarding the policies and some of them are always set to the following values to help your country’s overall events and a bit with your ratings:

Police force: level 4 (remember, you’re just coming after a revolution)
Courts: level 3 (you have to keep things under control!)
Disability and Homelessness: level 4 for as long as possible

The other things should be played with based on the ratings of the different groups. Liberals are the most difficult to please, so stop dreaming about having them too happy – this would most likely mean that everybody else will hate you. Focus on keeping the Capitalists up for the aforementioned bonuses, as well as the Patriots. Having the Fundamentalists too high will not be appreciated by the US who can really be your friend and help a lot!

The events and public speeches
Every turn, there will be a random event triggered and they are completely random. You can try to remember the effects your choices have – because eventually you will get them again in a new game – and follow common sense when making a decision, as most of the decisions you can make are pretty obvious in terms of whom they will upset. I found out that the EU is the one you shouldn’t really care about, so you can sabotage them as much as you want to. If all possible choices seem to result in penalties, it’s usually wisest to go for the ones that affect a category that you have a high score with.

Your yearly speeches also matter a lot. You won’t be able to get them in the green unless you go for the +++ stuff, but that will prove expensive and difficult to do in the long run: any or most of the promises you make will turn back to bite you if you don’t respect them. I usually go with the easiest things, never impress anyone with my promises but never have to deal with events based on my unfulfilled promises that return in large penalties.

There is a lot that Rogue State throws at you, so the more you play, the better you will get. Always thing and strategize – you’re a leader and you have to do this if you want to win!

Do you have other tips and tricks to share with fellow presidents? Let us know by commenting below!