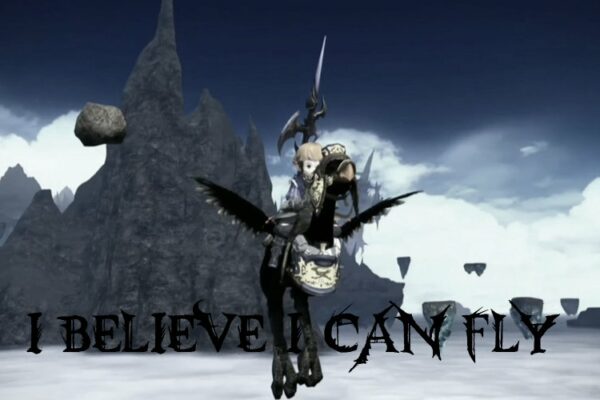 Flying has now come to Eorzea! The expansion sees three of the new areas be traversed by flight, which is incredibly handy because the new areas are massive. And traversing the lands from the skies is amazing – the view is absolutely gorgeous.

But how do you fly? It’s clear that when you arrive, you don’t have the ability to fly. During the main scenario quests you will be given a black chocobo whistle and an aether compass. Summon the chocobo, bind that compass to your hotbar(you will find it in Key Items) and you can start searching for those air currents.

Using the compass, it’ll point you into the general direction of where the air current is. You will still have to look for the current, though it’s quite unmissable. It looks like a weird ball of swirling wind. Attune to the current and it’ll disappear. Then onward to the next current!

Each area has a total of 15 air currents. 10 of those are ones you must find throughout the area, the other 5 are from quests. 1 of those quests is always a main scenario quest. There is an exception to this and that is the last area where all currents are gotten as rewards from the main story quest.

For quick and easy access, here is the list of all the air currents, the ten you have to attune to, as well as the quests located for the remaining five. It’s well worth hunting for as many currents as you can when entering a zone, though mark down which ones you’ve done in case you get stuck. If you cannot remember how many you have already found, you can go to the travel menu and in the aether currents tab you will see how many you have collected. Unfortunately, it doesn’t tell you where the found ones were located.

Attuning to these currents allows your black chocobo mount to fly. To have the ability to fly on other flying mounts(grand company chocobo, fat chocobo, primal ponies as well as some mounts gotten from quests), you will need to complete an additional quest titled; I Believe I Can Fly. This quest is located in the Ishgard in the Foundation. The quest giver is Arnoulain located at the following co-ordinates; (31×23). This quest requires you to go fight some mobs with your chocobo buddy.

There’s a little too much for me to cover here but feel free to check out more blogs related games.

Enjoy the lands from a new perspective as you can now fly through these giagantic areas. Oh, and take a jacket, it’s really cold up there!