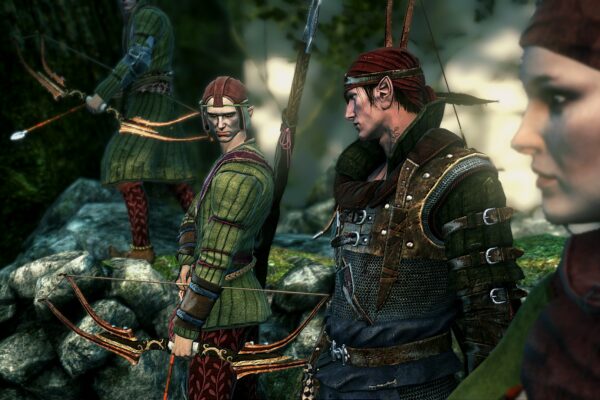 Due to being treat poorly by the humans in the Northern Kingdoms, the elves and other non humans formed a guerilla group known as the Scoia’tael. The Scoia’tael are also known as ‘the Squirrels’ because they live like squirrels in the woods. The Scoia’tael  hate humans just as much as humans hate non-humans, and they attempt to kill as many of them as they can. They allied with Nilfgaard against the Northern Kingdoms, and were chiefly used by the Nilgaardian Emperor,  Emhyr var Emreis, as a diversion but also to support his army. In return for siding with Nilfgaard, the elves received  Dol Blathanna (the Valley of the Flowers) as an independent state. Enid an Gleanna, also known as Francesca Findabair, is the queen of their state. Dol Blathanna used to belong to the elves for many years until the humans conquered it and the elves then fled to the mountains. They hoped to wait out the humans, as they thought they were nothing more than a plague which would one day end.

Elves differ from humans in looks slightly, but are generally considered attractive. They have pointed ears and they have small, identical teeth without canines.