The moustachioed maestro has been holding these events since 1998, arguably birthing the entire ‘minigame compilation’ genre in the process. But while so many that followed were cynical, half-assed money spinners, Mario Party is oddly engaging.

Any set of minigames (which isn’t a bag of balls) needs a premise, a purpose; something to hold these little hors d’ouvres together. Nintendo Land’s carnival hub and general theme did this rather well, but what exactly do these ‘parties’ consist of?

There’s no jelly and ice cream, or terrifying-looking clown making half his youthful charges wet themselves as he makes lumpen balloon animals while grimacing like Hannibal Lecter. As such, Nintendo clearly don’t agree with me on what defines a ‘party.’ But I suppose a rather limp board game-based romp will do too. You select a character from the usual band of Mushroom Kingdom dwellers and a futuristic, interactive ‘board’ on which to play, and the game begins.

Each player takes turn to roll the dice (literally, the standard Mario block-headbutt has to be employed) and travel the corresponding number of spaces on the map. Landing on blue squares will earn you coins, whilst red spaces will detract some from your score. At the end of each round –everybody having taken a turn each– a minigame will ensue, with teams or otherwise determined by the spaces everybody is on. Further coin-age is gathered by winning these. 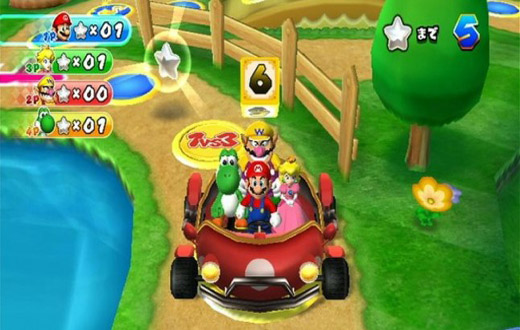 The games themselves are the usual party game fare, and have been remixed, removed, updated and added to through every installment of the series. A little gimmickry has also been added along the way, depending on the console in question (“Hey there, Needless Wii-mote Waggling! How have you been? Still sucky? I thought so.”). The lengthy board game business in between can often drag, meaning that the free-play selection of games themselves is a preferred choice for many; though each must be unlocked by encountering it during a match.

Still, it is often said that no local co-op can inspire fury, mother’s-weight-problem insults and controller cord stranglings like a few rounds of Mario Party. When a cheeky item or chance event steals one of your precious stars (the real key to winning), you’ll be all kinds of un-amused. Among even the best of friends, it’s a hilarious and infuriating experience like none other in gaming.

Whether ten iterations of the series are necessary is another matter entirely.

Follow us and get the latest news delivered to your timeline!
Previous ArticleMultiplayer Madness Retrospective: Streets of RageNext ArticleSpin-Offs: The Good, the Bad and the Dire: Metal Gear Rising- Revengeance