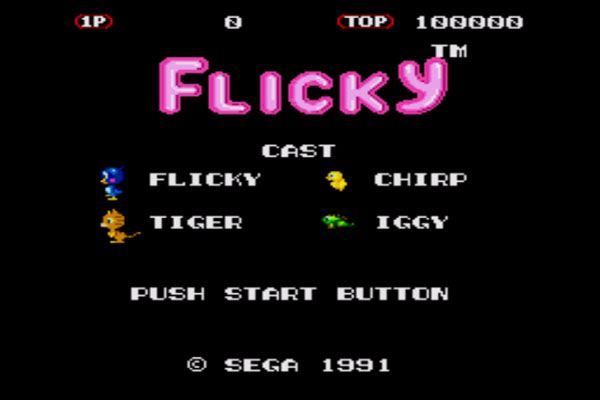 Before Sonic, there was Flicky.

This little bluebird can claim to be among Sega’s early almost-mascots-if-you-squint-a-bit. It was eclipsed in this role by Alex Kidd a year or two later, but let’s disregard him. His terrible sideburns and jumpsuit combo deserves to be consigned to the drawer marked ‘crap from the eighties that must never see the light of day again,’ after all (see also: Culture Club).

As far as plotting goes, all we need to know –and all we’re told, come to that– is that Flicky’s chicks have been stolen. To retrieve them, you’ll have to journey through a series of arena-ish levels, and guide the hapless younsters to the exit door. Opposing you are Tiger the cat and Iggy the lizard, both of whom will be hunting you along the way. In short, with all the platform-hopping involved, it’s a little like a vertical Pac-Man. 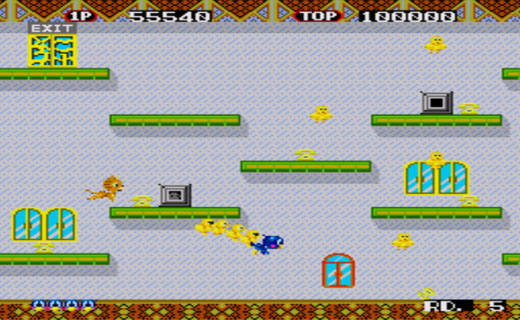 This obscure, cutesy release is surprisingly frantic. There are a dozen or so chicks to gather in each stage, and they remain suspended in place until you gather them. Touching them will cause each wee bird to trail behind you, and huge score boosts are available for ‘delivering’ several at once. But there’s a catch. A big, irritating, furry catch.

Contact with the roaming enemies will break the ‘chain’ at the point they touched (contact with you, meanwhile, will merely KILL YOU IN THE FACE). The stray chicks, so docile before, will suddenly start dashing about like Usain Bolt after some questionable seafood. Once this happens, your panicking charges will be spread throughout the level, a couple of cats will be closing in, that darn lizard will be climbing up the walls towards you… It’s so easy for a tiny slip to cost a huge amount of sweet, sweet points.

Flicky is more fiendish than something with such an endearing exterior has any right to be. I have fond memories of the game, as one of the first I played on the Mega Drive/Genesis, but it’s also one of my gaming demons. There are 48 levels in total, and I have never seen half of them. One day, I shall reach that gloriously anticlimax-y congratulations screen. One day.