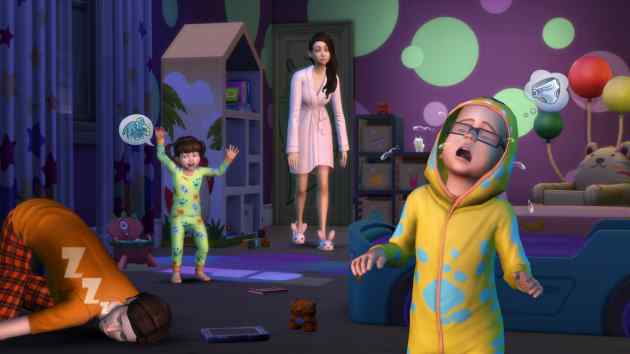 Sims 4 by EA has been released for a little over two years now. While it is quite a magnificent game all on its own, it was missing bits and pieces from its predecessors. One of those particular pieces was rather large: a whole life cycle. When your Sims had a baby, that baby would grow (as all things do), but it would pop right from the bassinet into elementary school. Generally, those kinds of things don’t happen, as there are a lot of terrible years in between of small children doing stupid things that will unknowingly get them killed. Sims 4 didn’t allow you those “wonderful” years, but now, they have finally returned!

They Grow Up So Fast

While it may seem arbitrary to people who haven’t played the Sims franchise, having that toddler stage introduces a little extra time on your Sim’s lifespan to introduce some game changing elements. Enrich their minds in those Toddler years so they grow up to be brilliant, Simolean-making scientists, or make sure their emotional levels are in check and you’ll have a regular Don Juan on your hands when he becomes of age.

A great point to this update was that stayed a total secret until its release in the newest game patch. Most of the time, large secrets like these get leaked weeks or months beforehand, like what happened with The Sim’s Vampire Game Pack that was announced recently. It was leaked over a month ago, so there was no surprise when that announcement came to be, but no one saw the toddlers coming! The developers have been working on this update for over two years now, and though there was a tiny hint dropped a year ago, these small people crawled their way into our hearts without us even noticing.

The significance of this update is also pretty astounding because it was completely free to those that had already owned the game. Instead of having to receive this update in one of the many expansion packs for the game, the developers stuck this update right into the direct patch of the game, without any additional fanfare. The update was almost 2GB worth of data and included the toddler life cycle, and a range of toddler hats, hair, glasses, outfits, onesies, body accessories and shoes. There were also eight unique toddler traits and at least 19 new toddler objects like high chairs, child potties, toys and more. This was a huge amount of content for a free update.

Let’s Set The World On Fire

If you’ve never tried The Sims before, perhaps this is finally the time to do it. While it may not fit your genre, or the ability to control a virtual human’s life creeps you out, The Sims 4 has so much interesting gameplay and dynamics to try out that you’ll find yourself deep within the game in just a matter of moments. Hours later, you’ve got a nice sized family, that bungalow you’ve always wanted in the hills, and a soft annoyance for Sims language. Soon, you’ll be buying the add-on packs, and your family will wonder where you’ve disappeared to. Just let them know that you’ve created a family all your own. Hopefully they won’t all die in a terrible kitchen fire because one of them is a bad cook.

Follow us and get the latest news delivered to your timeline!
eaElectronic ArtsexpansionFree UpdateThe Sims 4Toddlers
Previous ArticleHorizon Zero Dawn: Coming Soon to PS4Next ArticleDid They Deliver? Thoughts on the Nintendo Switch Reveal