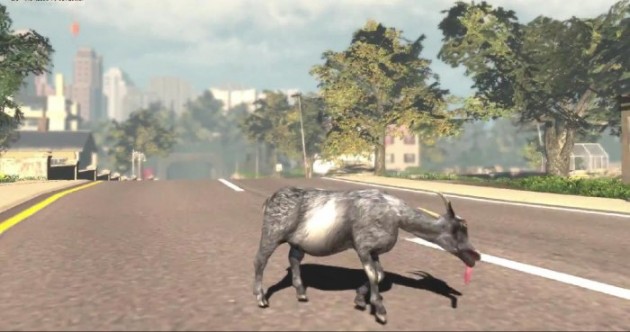 Do you know any huge things that started out as a joke? Well, Goat Simulator appears to be one of them after Coffee Stain Studios decided to turn what was initially an alpha footage hoax into a full game featuring… a silly goat. One that does silly stuff, gets hit by cars and wrecks things around. Just like that.

Initially, the Goat Simulator was presented via a joke video on YouTube, showing up some otherwise nice mechanics, a good physics engine and the silly goat in action. You can check it out below, it already got over 2 million views on YouTube and it will certainly not stop here:

The strange thing is that people considered this idea so amazing and fun that they demanded a full game to be launched. And since Coffee Stain Studios won’t say no to fellow gamers (especially since they did have some sort of a working game created), they decided to actually make Goat Simulator a reality. One in which you will control the silly goat and wreck things around. You can also use an axe glued to your huge goat tongue to… wreck even more things around. Oh, my!

Here’s the updated trailer showing some of the new stuff that the goat has learned:

You can keep an eye on the progress of Goat Simulator by checking out the game’s official website.

Follow us and get the latest news delivered to your timeline!
Goat SimulatorSimulation
Previous ArticleHow to Enter the Titanfall Beta Now!Next ArticleThe Elder Scrolls Online: Previewing the Magnitude of the Disaster