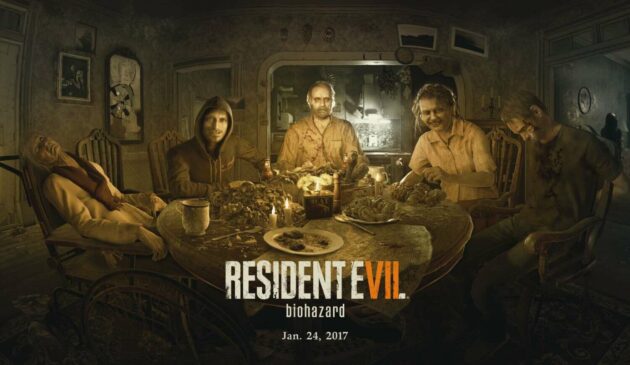 The highly-anticipated release of Capcom’s Resident Evil 7: Biohazard is almost with us. After being teased at 2014’s E3, gamers have long been marking their calendars for the day they will finally be able to slide this baby into their consoles. Well—the time is almost here. On January 24th, we all can pretend to line up politely then make that relentless mad dash to the checkout counter. Excitement is understandable, but let try to be a “little” civilized folk. I love throwing some elbows as much as the next guy but remember to BREATHE. We’re all gamers waiting for our copy, no fight club, please.

We’re looking at an incredibly stacked year for gaming in 2017. Resident Evil 7: Biohazard will be the first of the big games to drop. The horror-survival game looks incredible! Presented in the finest format available; the 4K resolution is truly awe-inspiring. The long gameplay demo release at this past year’s E3 conference showed an improved stunning environment. From the eerie rooms and hallways, the life-like look of the weapons, even down to the unbelievable effects of the wounds on the body and the blood.

For the first time, you will play in the first person. Making it even more horrifying to the user experience. If that’s not enough for you, Resident Evil 7 for the first time ever will also be available on VR (virtual reality) for PlayStation VR. Imagine submerging yourself into a first-person horror-survival game where all your senses are essentially being attacked while being forced to keep yourself alive. It sounds…so much fun! I honestly can’t wait for the hundreds of YouTube videos of people’s reactions to playing this on VR. Someone’s definitely thinking outside the box over there at Capcom.

In terms of gameplay, the creators have stressed: “not to expect a shoot-off”. Making it sound like you will need to manage your ammunition wisely if you aim to make it to the end. Calling for the much useful real-life skill of improvising. That doesn’t mean you shouldn’t expect some of the lethal weapons at your disposal. You’ll be able to wield: the always handy chainsaws, powerful explosives (grenades, etc.), flamethrowers (because who doesn’t love a flamethrower?), and the original classics like handguns and shotguns.

Some of the new features include puzzle solving and healing ingredients, like herbs. The healing herbs are a huge benefit to the constant chaos and damage you’re sure to encounter throughout the game. The interesting new thing I believe is puzzle solving. I mean think about it, imagine trying to deal with a puzzle of some kind and being attacked in waves by monsters and infected people. That battle of focus will undoubtedly be challenged to epic proportions while trying to solve a puzzle. It sounds so stressful…I can’t wait!

I’ve been trying to be patient with the release of this game. Truth is, it has happened. One of my best friends asked for this game for her birthday and I jumped for joy by preordering it as her birthday gift. She went crazy, as one sane person would. Getting the gift of joy. Of course, that joy comes in a box of horror with ominous noises. But besides that, pure joy.

We’re coming down to the end now; Under 2 weeks until the release date. This early contender for GOTY (Game of The Year) should delight fans as the past 10 have. The new improvements with gameplay, design, and format, set this game up to be played day after day. For all the gamers of the world, prepare yourself for Resident Evil 7. It’s one not to be missed or delayed in playing. Don’t let your friends tell you how good it is, go experience it first. Check it out on January 24, January 26th in Japan.

Follow us and get the latest news delivered to your timeline!
#comingsoon#excited#fun#happy#RES7#ResidentEvil7Biohazard#tuesday#videogame#videogamesCapcomE3HorrorPreviewps4ShooterSurvivalVgamerZvirtualrealityVRXboxOne
Previous Article5 Reasons Sony Should Make Vita 2.0Next ArticleXbox One Exclusive Scalebound Has Been Cancelled