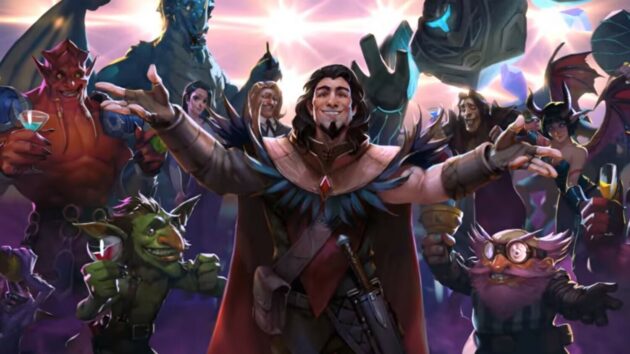 During a special event held at ChinaJoy Expo and streamed through the official Hearthstone Twitch channel, Blizzard revealed the next expansion for their popular digital card game.  The new Hearthstone adventure, One Night in Karazhan, will be an adventure based around the home of the Guardian Medivh back in its glory days.  Medivh is setting up for the greatest party in the history of Azeroth and he’s going to need help getting the place in order before the festivities begin.

Like previous adventures, the new Hearthstone adventure will have players take on a number of single-player boss battles to win new cards for their collections.  The journey will be spread across four wings with three bosses each.  The first step is the dining hall where you’ll have to take on a golem made of dinnerware and play a Hearthstone-version of chess.  Next is the opera house with plays based on Romeo & Juliet, The Big Bad Wolf, and The Wizard of Oz.  The menagerie comes third with a stampede of beasts running wild and fiends like the satyr Terestian Illhoof leading the charge.  Your final stop is Medivh’s private quarters where mythical opponents like the dragon Netherspite and the terrifying Shade of Aran will put you to the ultimate test.  Before any of that, however, all players will be given a single, free prologue mission that will award them with two new cards.

New cards that have been revealed for the new Hearthstone adventure include the Ivory Knight, a Paladin minion that discovers a spell, Kindly Grandmother, a Hunter minion that summons the Big Bad Wolf upon death, and the legendary Curator that draws a beast, dragon, and Murloc from your deck.  More cards will be revealed over time as we draw closer to release.

One Night in Karazhan is set to release its first wing on August 11th.  Are you looking forward to this funky interpretation of the famous tower?  What new decks are you planning to build with this new Hearthstone adventure?  Leave a comment below and let us know what you think.

Follow us and get the latest news delivered to your timeline!
AdventureBlizzarddlcHearthstoneOne Night in Karazhan
Previous ArticleNES Classic Edition Announced By NintendoNext ArticleHearthstone: One Night In Karazhan Cards Preview #1