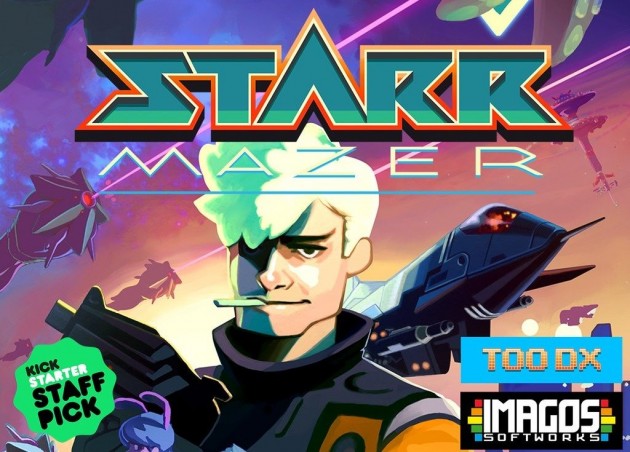 Starr Mazer fuses 2 of my favourite video game genres, the shmup and the point and click, into a sleek and sexy retro Sci – fi epic which promises some interesting gameplay elements such as the groundbreaking new “OMG” narrative. No, that wasn’t me being incredibly over the top, the “OMG” actually stands for something the developer, Imagos Softworks calls “Open – Middled Gameplay”.

What this means, is that an entire playthrough of the game is like a season of a TV show, but each episode within can appear in almost any order. A decision you make during gameplay can trigger the start of one of these “episodes”‘ and your actions during can cause different branching paths and events to occur. The gameplay is supposed to be seamless between the ship and adventure sections, with the point and click features taking place on solid ground, while the shmup sections document the large amount of time you’ll spend travelling between locations. On top of this, the shmup sequences are dynamic, with a few minutes meaning the difference between flying into the middle of a space battle, or just passing by the resulting wreckage. The graphical style is reminiscent of the early Lucasarts adventure games, which brings back awesome memories of playing Monkey Island on my PC way back when.

Starr Mazer boasts an awesome soundtrack with names like Virt (Shovel Knight) and Manami Matsumae (Mega Man) on the bill, and I think the Kickstarter looks to be a great investment in an awesome game. The funding period ends in 68 hours, with just $10,000 dollars to go before they reach their target, which is $160,000. It looks like Imagos Softworks are ramping up for a big push in the final days of their campaign, so if Starr Mazer floats your boat, why not toss a few bucks their way?

Follow us and get the latest news delivered to your timeline!
KickstarterStarr Mazer
Previous ArticleOddworld: New ‘n’ Tasty Hits SteamNext ArticleHow to Build a Strong Collection of Cards in Hearthstone