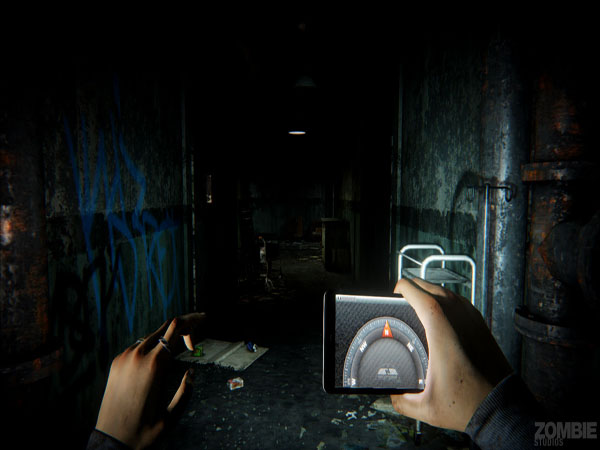 Jared Gerritzen of Zombie Studios is a self-proclaimed aficionado of Japanese horror. He is also the proud owner of perhaps the most brilliantly craptacular beard I’ve ever seen. The latter fact has very little bearing on this article, but it was worthy of mention anyway, because damn.

Anywho, on to those Japanese sensibilities, and how they influence the studio’s latest title, Daylight.

The game’s focus is upon ‘psychological horror,’ a notion more typical of the East. The idea is that what may be lurking in the shadows is infinitely more worrisome than anything that currently is chewing on your butt. This approach, when handled well, can keep us on tenterhooks through much of a movie or game. It really depends upon the individual’s ideas of what ‘defines’ horror: direct and brutal knife-slashy violence and gore, or a slow burning unsettling atmosphere.

Not that the two can’t coexist, of course, but Daylight almost entirely eschews the former. There are jump scares and creepy floating undead witch-things, granted, but they’ll kill you horribly off-screen. All you get is something like Resident Evil’s dramatic YOU’RE DEAD screens, minus any sort of blood.

This enigmatic tale stars a woman known only as Sarah, who awakens in a dingy hospital clueless as to how she got there. She is armed only with a cell phone, which functions as both a flashlight and a map of the area. Needless to say, the hospital is of the pitch-black abandoned asylum variety, and there are rumours of… things lurking about its halls.

Your are guided by a sinister voice, which crackles through your phone at regular intervals. This old dude has some relation to the hospital, and to you, but it’d be spoilerific to delve into that. Suffice it to say that the game is divided into brief ‘chapters,’ each of which contains several Remnants you must collect to proceed. These are small notebook-y files, which provide fleeting insight into what has happened/is happening at the hospital.

It’s a game of exploration, not of combat. The only ‘weaponry’ you’ll find are glowsticks and flares, which have different helpful functions. The first will place an eerie glow over points of interest in the environments, such as desks and drawers which contain Remnants. Meanwhile,the flares are your only means of escaping the Shadows (except simply running in the opposite direction in an underpants-on-fire hurry).

Lighting one will cause any of these witch-beasts in the vicinity to burst into flame and die/melt/whatever the hell happens to them. Which is, y’know, pretty darn handy. Naturally, both are in equally scant supply, and you’ll have to be thrifty.

So just how scary is Daylight? Again, that’s up to the personal experience of the player. It’s full of all the typical tropes you’d expect of the genre: the distant ghostly wails, the disembodied footsteps, the thing-falls-from-the-ceiling-as-you-pass-in-an-attempt-to-make-you-foul-yourself… it’s very much business as usual. Attacks from the witch-things are rather rare, but their unpredictable nature ensures that they’ll get a jump or two out of you, and you will find wandering flare-less unnerving.

What the game does have on its side is a very oppressive atmosphere. The hospital reminded me somewhat of tromping through Dead Space 2‘s nursery, though without Isacc Clarke’s weapons of mass destruction for protection. The creepiness of the Remnants ramps up slowly and very effectively too. The first files you receive tell of the charming new doctor and his hopes for this fancy establishment. As you proceed further into the hospital/game, increasingly sinister facts begin to come to light. I found this to be a fascinating hook.

Others will disagree, and it’s certainly valid to do so. Daylight is a game in which much of the scariest subject matter is strictly implied, or rather vaguely hinted at. For this reason, some players have simply scoffed that ‘nothing happens,’ which is a fair enough conclusion on a certain level. If you’re looking for the more actiontastic horror of Outlast or perhaps Resident Evil 4, you’ve come to the wrong place. This is at the complete opposite end of the spectrum.

If you crave a more methodical experience, you might find that Daylight will –as Mr. Sinister Cell Phone Voice promises– consume you. It’s available now, for PS4 and PC.

Follow us and get the latest news delivered to your timeline!
DaylightPCps4Zombie Studios
Previous ArticleBound by Flame: 5 Reasons Why You Should Play This GameNext ArticleIs Destiny In Trouble?