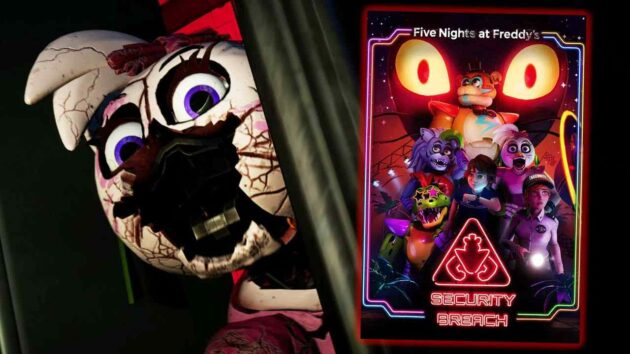 The gameplay of Five Nights at Freddy’s: Security Breach

In Five Nights at Freddy’s: Security Breach, the player controls the boy, Gregory. He has to complete multiple tasks till 6 a.m. to survive. Gregory is trapped among brutal animated creatures in the big shopping center. Some animated characters are Montgomery Gator, Glamrock Freddy, Sunnydrop, and Giant music man. The player has to discover more characters who help the animated characters find Gregory, like Vanny, a rabbit, Vanessa, a security guard and robot, Staff Bots. By every night, these creatures become more powerful. Gregory can distract them by hiding or throwing stuff. Avoid running, as stamina becomes low, and if it happens, the player can’t even move fast. Gregory has a flashlight and wristwatch to see through the dark and access the mall systems. But it requires frequent charging. He can use two-weapon more: Faz-cam for knocking up all the enemies but in limited power and Fazblaster for a direct headshot with unlimited power but difficult to use.

Gregory is locked in a shopping mall, Freddy Fazbear’s Mega Pizzaplex, for the night among Glamrock animated character and Vanny, who is a true believer of Glitchtrap. On the other hand, Freddy is the only one that Vanny and Glitchtrap manipulate. Gregory should partner up with Freddy, Sunnydrop, and Vanessa to find clues and complete tasks. He will get help from them for escaping through the mall. Freddy’s stomach’s compartment is named “birthday-cake-hatch” and easily gets past other characters by seeing through Freddy’s eyes. Consequently, the power of Freddy’s battery is limited and has to recharge frequently. Gregory also receives recommendations, shortcut keys, enemies, and challenge signs by Freddy.

A new teaser by Scott Cawthon was released on August 8, 2019, and on April 21, 2020, the names of characters were leaked from the list of upcoming products by Funko. The teaser trailer was launched on September 16, 2020, and new additions to the game were announced on November 17, 2020, due to the pandemic (covid 19). Two new teaser ware were released in early 2021, January and February. And due to the size of the game, the game’s release date was delayed to December 2021, and on October 27, 2021, the release date of December 16, 2021, of this game was revealed.

Funko produced a series of Glamrock animatronics action figures and collectible mystery minis on October 30, 2020. And on April 28, 2021, Scott Cawthon produced and published Security Breach: Fury’s Rage, a side-scrolling beat-up game that was made accessible for free on Game Jolt. It was released as an apology before the release date of Five Nights at Freddy’s: Security Breach.

Follow us and get the latest news delivered to your timeline!
an upcoming nonlinear survival horror video gameinitial release date of Five Nights at Freddy's: Security Breach is December 16
Previous ArticleActivision won’t be allowed to take part in this year’s The Game AwardsNext ArticleAeterna Noctis Official initial release date is December 15, 2021