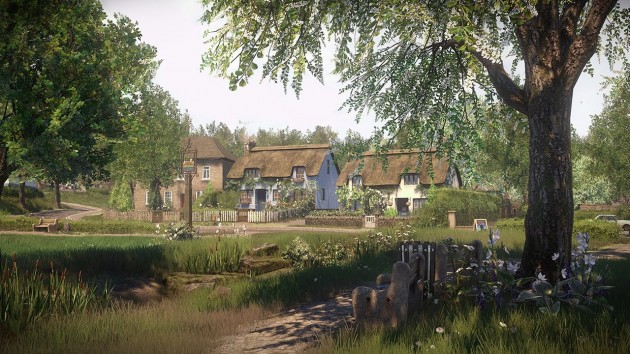 Everybody’s Gone to The Rapture is a first-person adventure game, developed by The Chinese Room and published by Sony, that allows you to explore an open world that its narrative structure plays a major role in gameplay. Creative Director Dan Pinchbeck shares the info through the website’s blog.

He explains that voice actors sometimes add their own touch which would ultimately result in forcing a change in the script to the better.

“One of the most inspiring things about working with voice actors is they bring depth to the characters you didn’t know was there as a writer. It was amazing to be able to work with the actors for a week before recording to rehearse and do script re-writes.”

Dan focused on Everybody’s Gone to The Rapture’s open ended structure and that the game lets you have the freedom in finishing the game in one session or divide it upon “six parts of roughly an hour each.” so it would be like a TV mini-series.

“You can play Rapture in one sitting, or you can break it up into six parts of roughly an hour each. In that way, it’s like a TV mini-series. We were really inspired by that format, by shows like Bloodlines, Six Feet Under, or The Killing. Our aim for the acting was to produce something that could stand shoulder to shoulder with the very best TV drama.”

The game’s characters that meet you are always in the form of light, faceless, which makes it more interesting for the player since he has full freedom to explore their past and know their stories.

“Not being able to see the character’s faces is a really important part of Rapture. We want you to be able to bring these characters to life yourself. Part of the non-linear nature of the game is that you’re free to really get to know characters and follow their stories.”

Everybody’s Gone to The Rapture is going to release August 11 for the PS4.

Follow us and get the latest news delivered to your timeline!
Everybody's Gone to The Raptureps4SonyThe Chinese Room
Previous Article8 Worst Moments of E3 2015Next Article“If You Watched Every [No Man’s Sky] Video, It Still Wouldn’t Be Spoiled For You,” Says Sean Murray