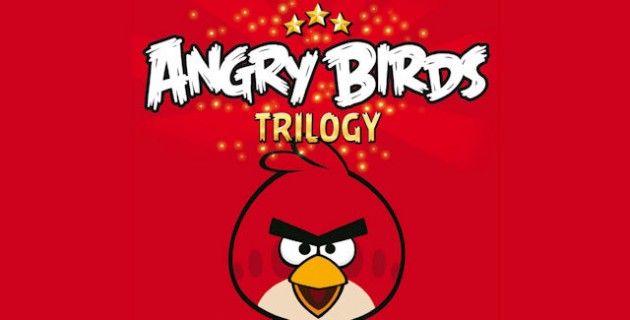 The Angry Birds Trilogy is out for the consoles, hoping to expand its userbase, no doubt. But is this trilogy worth picking up if you’ve already got these games on your phone? Or, worse yet, digitally downloaded on your console? It’s hard to say, it depends on a lot of things, but let’s get to the review.

First off, the game’s graphics look great on the big screen. It’s nice to see the jump in quality from squinting at your phone to see the birds to playing this on a huge 1080p screen. It looks great. Big praise to the graphics. The sound is the same, but also sounds better coming out of actual speakers instead of a phone.

The gameplay is the same Angry Birds tried-and-true formula that you’ll get on the phone, tailored for consoles. The analogue sticks works great for lining up the shots to shoot the birds out of the slingshot. The gameplay here is addicting, it’s a lot of fun, no doubt. And you’ve got 3 full games to get through.

Try not to bother with the Kinect or Move integration, these really don’t add much to the experience. In fact, quite the opposite. They complicate it and make it more frustrating to play than anything. Stick to the good old controller and you’ll have a better time. And playing this game with a controller is a lot more comfortable than a phone, at least, for me. And you don’t have to worry about scrolling back and forth to see where you’re shooting, playing on the big screen allows you to see the full level.

Unfortunately, this trilogy doesn’t include the recently released Angry Birds: Space. It’s unclear if this will be made available digitally for PSN/XBL or in a second Angry Birds Trilogy. Either way, the three games you get should keep you entertained for quite a while.

So, is it worth it? For anyone who hasn’t experienced Angry Birds, it’s worth it, just wait for a price drop. $40 is just way too much. Especially considering you can get them for a couple bucks on your phone. If you already own them on your phone, unless you’re a huge Angry Birds fan, there’s really no point in getting this, it’s the same experience. But it’s still darn fun.

Follow us and get the latest news delivered to your timeline!
Previous ArticleCall of Duty Elite Free With Black Ops IINext ArticleTop Multiplayer Games Of This Generation