343 have already revealed the contents of their Halo 5: Guardians Collector’s Edition, priced high at $250, a while back and it includes a statue of Master Chief and Spartan Locke, a Metal Earth Guardian model, special Limited Edition packaging, a SteelBook game case, Spartan Locke’s classified orders Dossiers on Blue Team and a digital copy of Halo 5 Guardians.

Halo 5: Guardians is a 2015 first-person shooter video game developed by 343 Industries, published by Microsoft Studios, and released worldwide for the Xbox One on October 27, 2015. The game’s plot follows two fireteams of human supersoldiers: Blue Team, led by Master Chief, and Fireteam Osiris, led by Spartan Locke. When the former goes absent without leave to track down the artificial intelligence construct Cortana, Master Chief’s loyalty is called into question and Fireteam Osiris is sent to retrieve him.

343 Industries started to plan concepts and objectives for Halo 5 shortly after the release of its predecessor, Halo 4. In late 2012, the team set out goals for the game, including larger campaign and multiplayer areas. Like Halo 4, it uses motion capture for character animation. It features new abilities and character designs, but does not feature any offline capabilities or local networking. It has a game engine that scales its resolution to maintain a frame rate of 60 frames per second. Unlike the first four mainline games, this is the first mainline game to receive a “Teen” rating from the ESRB.”

Today they announced that they have gotten a lot of feedback concerning the digital copy of  Halo 5 Guardians since some people wanted it to be a physical copy. The image of the contents of the limited edition is below. 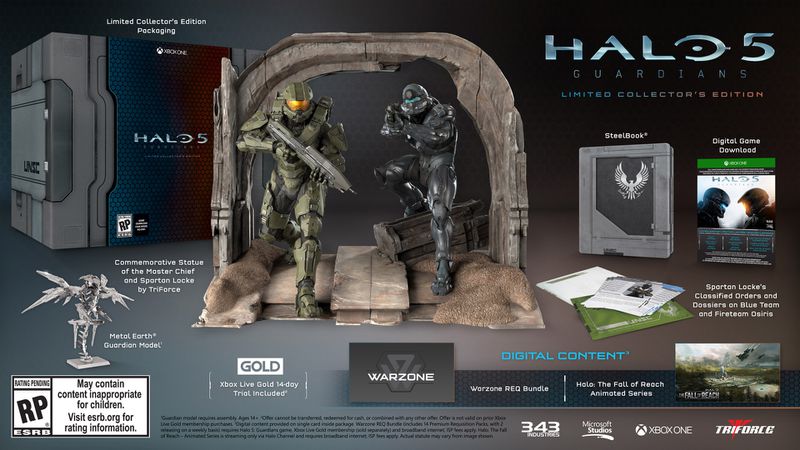 “We let you know that we had heard the feedback that some of you prefer a physical disc instead of a digital copy, and that we were exploring options.”

As stated on Halo Waypoint .

“Today, we’re able to confirm that for those who would like a physical disc, we’ll provide an option for fans to exchange their digital copy for a physical copy at no additional cost. We’ll get into details as we get closer to launch, and we’d like to once again thank you for the feedback.”

Follow us and get the latest news delivered to your timeline!
343HaloHalo 5Xbox one
Previous ArticleMortal Kombat X’s Tremor Brutalities and Fatalities RevealedNext ArticleXbox One App Update for Windows 10 Brings Game Streaming, Party Chat and More