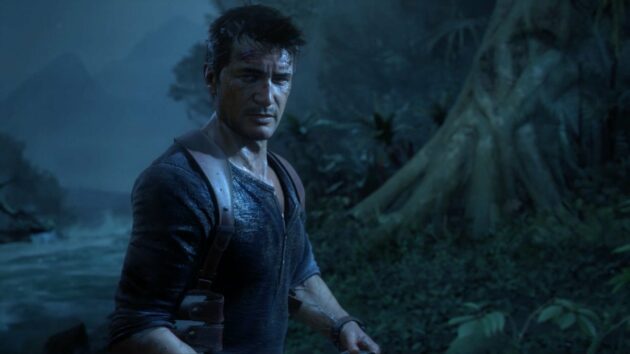 Sony has revealed the first footage of the highly anticipated Uncharted 4 gameplay via Playstation Experience, and it is a delicious return to form.

Being the heavy hitter that they are, Sony has provided a whopping 15 minutes of debut gameplay. From improved melee combat to a glorious firefight, you are bound to pump your fist at all of this glory.

With each new Uncharted game that is announced, you always know what to expect. Improved graphics, new player mechanics, and a handful of new one-liners that somehow avoid grating on your nerves in provided in the Uncharted 4 gameplay. What I didn’t expect, however, was such an emphasis on verticality and movement. This trailer of Uncharted 4 gameplay has blown me away with the amount of chaos that happens during any given firefight.

In the previous games of Uncharted, many of the firefights would go down with you simply finding cover and waiting for enemies to flood in. In Uncharted 4, it seems – so far at least – that enemy AI is more dynamic, and enemy placements are much more meaningful. Drake is constantly climbing, hiding, running, dodging, and shooting, and it all seems much more fast-paced and hectic than ever before.

Wikipedia described the characters of Uncharted 4,

The main character of Uncharted 4: A Thief’s End is Nathan “Nate” Drake (Nolan North), a veteran adventurer and explorer who, following the events of Uncharted 3: Drake’s Deception (2011), has retired from fortune hunting alongside his wife Elena Fisher (Emily Rose), a journalist, to a more normal life, and taken up employment with a salvage company in New Orleans. The game introduces Samuel “Sam” Drake (Troy Baker), Nate’s older brother, who was presumed dead. Drawn back into his old life of adventure by his brother, Nathan is aided by his long-term friend, fellow adventurer, mentor, and father figure Victor “Sully” Sullivan (Richard McGonagle). Their journey to find and recover the long-lost treasure of pirate Henry Avery brings them into conflict with wealthy and dangerous businessman and treasure hunter Rafe Adler (Warren Kole), his partner Nadine Ross (Laura Bailey) who runs the private mercenary group Shoreline, and drug lord Hector Alcazar (Robin Atkin Downes). The child versions of Nate and Sam are portrayed by Britain Dalton and Chase Austin, respectively.”

Whether this segment is representative of a majority of the action in Uncharted 4, or simply a heavily scripted one-off, we will have to wait and see. I am feeling quite positive, however, as Naughty Dog never disappoints.

Follow us and get the latest news delivered to your timeline!
gameplayNaughty DogPlayStation 4playstation experiencerevealtraileruncharted 4
Previous ArticleThe Forest Coming To PS4Next Article‘Super Smash Bros Wii U’: Gotta Get That Glory!