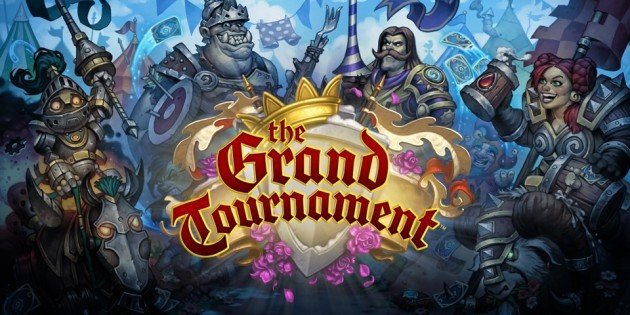 The next big expansion for Hearthstone, The Grand Tournament, is on the way, and the biggest new twist being new interactions with hero powers.  This includes the new Inspire keyword that triggers an effect whenever you activate your hero power while that minion is on the board.  Sadly, all the theory-crafting that we would see planeswalker-like cards or mounts enter the game was proven wrong.  Still, we’ve got plenty of fascinating new cards that interact with hero powers, including some of the newest mage cards. 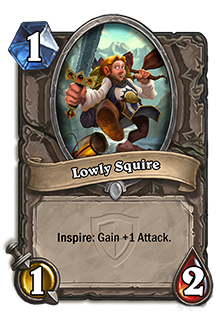 The Lowly Squire offers a look into the basics of how the new Inspire ability will work.  Every time you use your hero power while he’s on the board, he’ll gain an attack point.  He’s a decent one-drop on par with Undertaker and Cogmaster.  While his effect isn’t as expedient as Cogmaster’s is in a mech deck, his potential growth can outweigh the Undertaker as you’ll always have access to a buff for him.  The difference is that hero powers can only be used so much at a time, so his growth is bound to be slow.  He’ll probably become a popular pick in Arena drafts given his versatility across all classes and decks.  For constructed play, he’ll fit in best with Face Hunter as that works best with aggressive plays and regular use of the hero power. 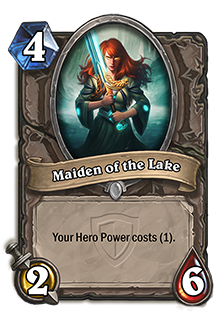 This card definitely has a lot of potential, although we’ll need to see more Inspire cards to know just how much.  Cutting the cost of your hero power in half can open up a number of new plays to you, and the amount of health gives her a good chance of lasting for a few turns.  Combined with the right Inspire cards, there are plenty of possible deck builds that can be made with her.  It’s worth noting that the effects of multiple maidens won’t stack, so you won’t be able to cast your hero power for free under any circumstances.  Still, this is a card worth keeping your eyes on. 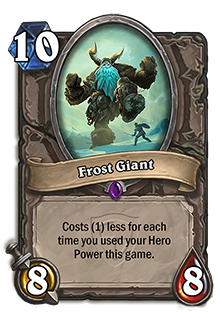 This card looks insane at first, but think about the kind of game you’d have to play to discount this.  For the first ten turns, you’d have to use your hero power almost every turn to get an advantageous cost for him.  Hero powers are usually used when there are no better options sitting in your hand, so it will take a long time to get this guy’s price down.  Maybe the introduction of Inspire effects will make power-spamming a viable strategy, but I have my doubts that it will become that prevalent.  Even then, the popularity of Big Game Hunter makes it likely he’ll just be knocked down in a flash.  He’s also unlikely to take a place in Handlock decks as they already have all the muscle they need.  Warrior might have the best shot at making this card work given its penchant for longer games and heavy-use of its hero power.  However, this is bound to become a monster in Arena as decks don’t need to be built around it to get its cost down to zero and it can have a massive presence when your opponent least expects it. 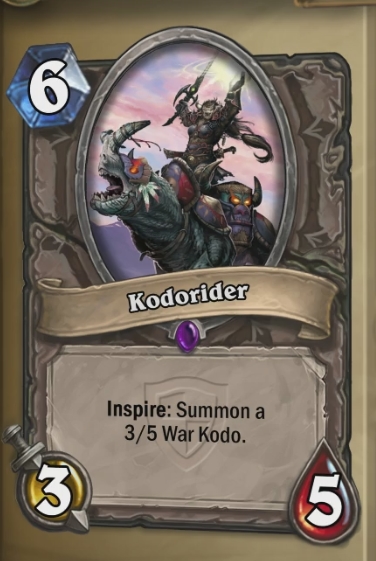 For 8 mana, you can get two 3/5 minions and use your hero power for free off of one card.  It’s actually not that big of a deal on its own, but combo-focused decks that rely on having a lot of bodies on the board will certainly benefit from her.  Plus, if she sticks around, you can easily call in even more.  If you see your opponent bring one of these down, you’d better knock her out ASAP or you’re going to have a lot of angry rhinos beating on your face.  It’s worth noting that, while the rider herself isn’t a beast, all of kodos she summons are.  Also, the War Kodos won’t have the same effect attached to them as the rider, so this won’t grow out of control like we’ve seen with the Grim Patrons.  She can be useful in Arena, but she will be very situational given her high mana cost.  Still, most other epics are useless in Arena, so a situationally good card is better than getting stuck with Hungry Crab or Junkbot. 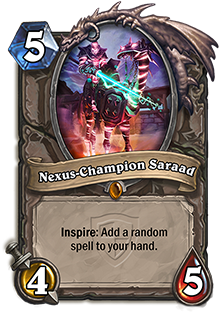 Now the hero power interactions are really getting crazy.  I hope Nefarian enjoyed his stay, because Saraad shows much more promise.  Playing him on curve can be risky as there’s a good chance your opponent will be able to shut him down immediately.  Also keep in mind that you can get any collectible spell from any class in the game.  There’s a fair chance of getting a useless spell, like Deadly Poison as a Mage.  At the same time, you could get ahold of one of the most powerful spells in the game for little effort.  It’s not a legendary that’s going to set the meta game on fire, by any means, but it’s worth playing around with just to see what you can get. 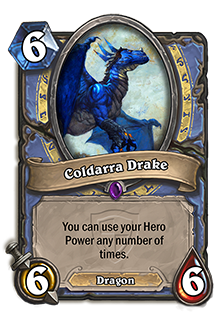 This brings us to some of the new Mage cards, and we’ve got an insanely good one to start us off.  Coldarra Drake is worth playing just for being a 6/6 dragon at 6 mana, but the unlimited use of your hero power opens up a lot of possibilities.  Admittedly, you’ll often be better off playing cards from your hand, but it’s a very handy option that can keep you well ahead of your opponent.  Let’s not forget about the Maiden of the Lake who makes for an incredibly potent tag-team with this drake.  However, I think they still need one more friend to really shine, like… 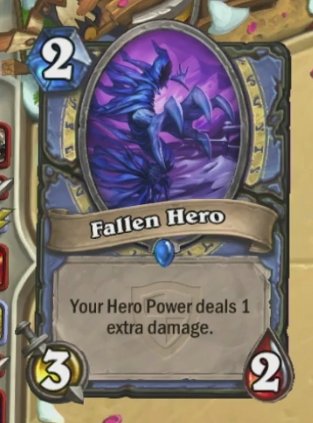 Let’s do the math: Two Fallen Heroes + Coldarra Drake + Maiden of the Lake + full mana pool = dropping the sun on your opponent’s head.  Alright, that’s not a very realistic scenario, but putting any of these three minions together will make your hero power extremely powerful.  The 3/2 for 2 stat line is also irresistible.  This is absolutely going to be a card worth tracking down. 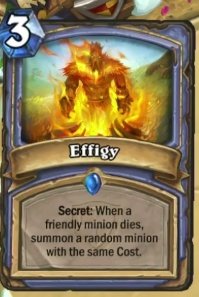 Finally, we have a new secret card and looks incredibly powerful.  After losing a minion, you instantly get a new one on the board of the same mana cost.  It could be any minion in the game, including ones exclusive to other classes, so long as they match the cost of the target.  The obvious comparison is that it’s a Recombobulator as a secret.  It definitely has potential, but there are two major downsides to it.  Being a secret, it can only trigger on your opponent’s turn and this means they’ll get to decide which minion triggers it.  Having any kind of body on the board is better than none, but you can easily get stuck with the worst possible result.  Second, there are plenty of minions that have their mana costs tied to battlecry effects that won’t factor into being summoned by Effigy.  Getting a Novice Engineer, Defender of Argus, or Faceless Manipulator off of Effigy is certainly going to be a let-down.  This kind of backfire is the same reason why Recombobulator sees little action, despite being a very strong card.  If you want to maximize its effect, you’ll want to save it for the late-game when your board only has high-cost minions that will most likely get you something great.

These are just the start of the 132 new cards being added to Hearthstone with The Grand Tournament.  We’ll be looking at more new cards very soon, including new Shaman and Hunter cards, so keep your eyes on VgamerZ.  Until then, remember to never drink and joust and don’t forget to tip your squire (I’m sorry I’m not sorry).

Follow us and get the latest news delivered to your timeline!
BlizzardHearthstoneHero PowerInspireMagePreviewTCGThe Grand Tournament
Previous ArticleThe Last of Us Is OverratedNext ArticleOddworld: New ‘n’ Tasty Turns One