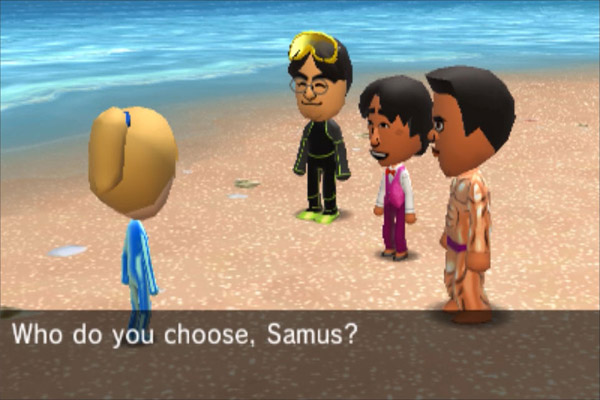 Some video games are just uniquely Japanese. They have an inimitable sense of the wackily charming and the charmingly wacky. This same spirit brought forth the Miis, the adorable little player avatars of the Wii and 3DS. And now, here they are in the fairly obscure release Tomodachi Life.

This Eastern handheld sensation is best described as The Sims with Miis. For lazy buggers. It certainly isn’t as ‘involved’ as that famous franchise, but it’s an odd little life sim with potential to do great things. Let’s take a look.

In Tomodachi Life, you are the owner of a small tropical island. Your personal Mii is its only occupant at the beginning, residing in the first room of a sizable apartment block. From there, naturally, your goal is to coerce others into moving in. You can directly import them from Mii Maker or StreetPass, or design them from scratch in-game. Once your best friends, your girlfriend, your grandma and Adolf Hitler are all settled in together, the experience begins.

Tomodachi means friends, and the whole experience is based around these relationships. As your tiny human farm experiment goes on, the Miis will interact with each other, visit others’ rooms and spend time together. All of this fosters friendships and strengthens bonds, to the extent that some will even marry and have children.

It sounds ambitious and complex, but much of this happens automatically. You select food, outfits and gifts for your Miis, and advice them on certain choices, but it’s a very passive experience beyond that. You’re an onlooker for the most part, it is a much less directed experience than The Sims or Animal Crossing.

Some will hate it for that, of course. Some cheeky buggers will complain that this isn’t a game at all. It’s a real time investment, the idea is to ‘check in’ each day to run little errands, see what new items you can add to your growing collection and watch those relationships gradually form over time.

Think of it, if you will, as Nintendogs with humans.

Follow us and get the latest news delivered to your timeline!
3DSNintendoTomodachi Life
Previous ArticleThe Best Cheap Gaming Laptops to Buy in 2014 – Under $1,000Next ArticleThe VGamerZ Monster Files: The Boos (Super Mario)