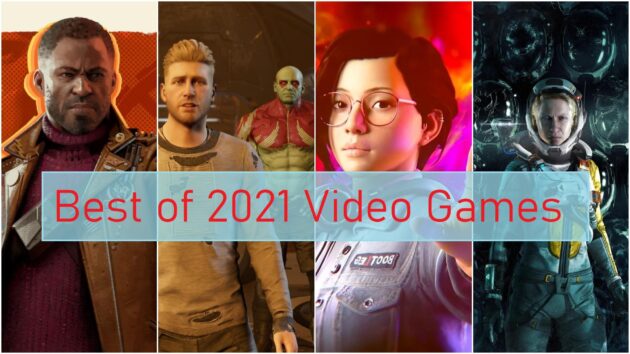 COVID-19 did not affect the arrival of high-quality video games in both physical and digital marketplaces. However, there were a few delays in launching games, but they are managed to provide enough content to keep us entertained throughout the year. So, there are a lot of games released this year that you will enjoy. Below are the 20 top 2021 video games.

Scarlet Nexus is a Bandai Namco Studios and Tose action role-playing game released by Bandai Namco Entertainment. It was published on PC, PS4, PS5, Xbox One, and Series X/S on June 25, 2021. Critics gave the game positive reviews, with the praise for combat.

Deathloop is a first-person shooter game released by Bethesda Softworks. It was launched for the PC and PS5 exclusive on September 14, 2021. According to review aggregator Metacritic, Deathloop earned “generally positive reviews” from critics being top 2021 video games. Save 50% on DEATHLOOP on Steam.

4. Neo: The World Ends with You

Square Enix and h.a.n.d. collaborated on the action role-playing game Neo: The World Ends with You, released by Square Enix. It was published in July 2021 for the Nintendo Switch and PS4 and in September 2021 for PC.

On July 1, 2021, Mohawk Games launched Old World, a historical turn-based strategy 4X video game for PC and macOS. The Old World is made up of Africa, Europe, and Asia, known as Afro-Eurasia, before contact with the Americas. As a result, the Americas are referred to as the “New World.”

6. Marvel’s Guardians of the Galaxy

Hot Wheels Unleashed is a racing video game by Milestone in 2021 for Mattel’s Hot Wheels toy line. The game was launched for the PC, Xbox One, and Series X/S, PS4, PS5, and Nintendo Switch on September 30, 2021.

Knockout City is an action video game published by Electronic Arts and developed by Velan Studios. It came out in May 2021 for PC, Nintendo Switch, PS4, and Xbox One. According to Metacritic, Knockout City earned mostly favorable reviews upon its initial release. Several reviews have compared knockout City to Rocket Arena, a 2020 Electronic Arts.

Returnal is a roguelike third-person shooter video game released by Sony Interactive Entertainment and developed by Housemarque. On April 30, 2021, it was available on the PS5. The game’s aesthetics, combat, and technological advancements got positive reviews when first released.

Halo Infinite is an Xbox Game Studios-published first-person shooter game created by 343 Industries. Halo 5: Guardians is the sixth mainstream entry in the Halo series and the third in the “Reclaimer Saga” (2015). On December 8, 2021, it was launched on PC, Xbox One, and Series X/S.

Torn Banner Studios and Tripwire Interactive have released Chivalry 2, a multiplayer hack and slash action video game set in 2021. On June 8, 2021, the game was launched for PC, PS4, PS5, Xbox One, Series X/S as a sequel to Chivalry: Medieval Warfare (2012).

It Takes Two is a Hazelight Studios action-adventure platform game released by Electronic Arts. In March 2021, the game was made available on PC, PS4, PS5, Xbox One, and Series X/S. It earned a slew of awards at the end of the year, including all-around Game of the Year from all 2021 video games at The Game Awards.

Cruelty Squad is a tactical first-person shooter created by Consumer SoftProducts, published in early access on Steam on January 4, 2021, and in full on June 16, 2021, for PC only.

Monster Hunter Rise is a Nintendo Switch action role-playing game developed and published by Capcom. After Monster Hunter: World (2018), it is the sixth mainline chapter in the Monster Hunter series, and it was published globally on March 26, 2021.

Turtle Rock Studios and Warner Bros. Interactive Entertainment have released Back 4 Blood, an online multiplayer first-person shooter and survival horror game. It was published on PC, PS4, PS5, Xbox One, and Series X/S on October 12, 2021.

Resident Evil Village is a survival horror game created by Capcom. It was a part of one of the best 2021 video games. The game was published on May 7, 2021, for PC, PS4, PS5, Xbox One, and Series X/S.

Wildermyth is a randomly generated tactical RPG with a focus on characters. It’s meant to enable you to write your wildest stories. It was published by Worldwalker Games and WhisperGames on November 13, 2019, for Mac and PC.

Forza Horizon 5 is a racing video game released by Xbox Game Studios and developed by Playground Games. It is the twelfth major installment in the Forza series and the fifth Forza Horizon title. For PC, Xbox One, and Series X/S, it was published on November 9, 2021.

Follow us and get the latest news delivered to your timeline!
BEST OF 2021best video games 2021
Previous ArticleThe Wolf Among Us 2 to be set six months after the original gameNext ArticleUpcoming 2022 video games with expected release dates