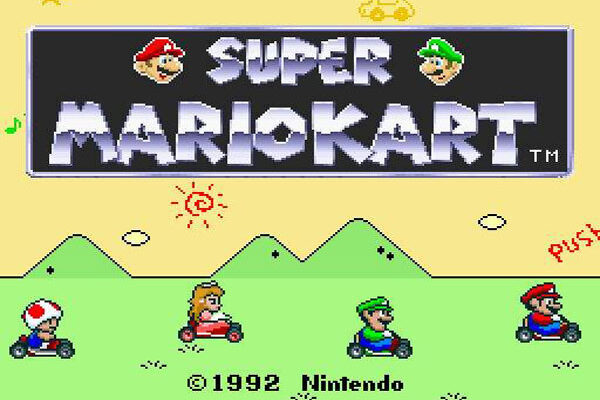 As you may have noticed, Mario Kart 8 arrives for Wii U today. This much-ballyhooed racer is regarded as one of the floundering console’s big hopes, the kind of release (alongside the upcoming Smash Bros) that can actually sell the darn thing. With that super mario , let’s party like it’s 1992 and pay homage to the game that started it all.

Super Mario Kart hit the SNES that year, and was really quite an odd notion at the time. After all, Mario, Luigi, Bowser et al were quite happy in their natural home: platform games. In one of those out-of-the-blue moves Nintendo would become known for, here they suddenly were in a toontastic racer.

These were the days before all manner of oddities entered the roster (Super Mario Galaxy’s Honey Queen, Petey Piranha and those darn Miis have all been playable in recent entries). It was a ‘pure’ Mario Kart in many respects, bringing us just the eight core racers: Mario, Luigi, Peach, Toad, Yoshi, Koopa Troopa, Bowser and Donkey Kong. Only our hairy monkey friend was a bit of an anomaly, this actually being D.K Jr. You can tell by that old Die Hard vest he’s wearing. Presumably, these were the days before gorillas earned the right to stride about naked as nature intended.

Anywho, so many aspects of the series were firmly in place from the get-go. The singleplayer options, Grand Prix and Time Trial, are Mario Kart mainstays. In the first, you’ll select a character and race the remaining cast across a sequence of four tracks. You score points according to your placement on each course, and the cup is awarded at the end. Meanwhile, Time Trial sees you cruising along the track of your choice on your own, in a bid to achieve the fastest time.

You’re surely familiar with the multiplayer modes too. The iconic Battle Mode was introduced here, and has returned in some form or another in every later installment. It’s that ancient, noble sport: just you, your opponents, a large arena, and some… brightly coloured balloons. It’s all very manly.

Super Mario Kart made liberal use of the SNES’s fancy Mode 7 effect. This screen-rotatey wizardry gave the game its vibrant visuals and that sensation of movement, and coupled with the jangly music, the Mario Kart magic was born.

So many kart racers arrived in its wake. From Crash Bandicoot to the Crazy-freaking-Frog, everyone wanted to get in on the action. It’s undeniable, though, that this was the game that set the template for the genre. Item boxes, weight classes, even most elements of the HUD were shamelessly aped. Of the many pretenders, so few could even hold a candle to the original (although Crash Team Racing was fantastic). It was surely the familiar characters themselves, and the Mario-fied tracks, but none could really complete. 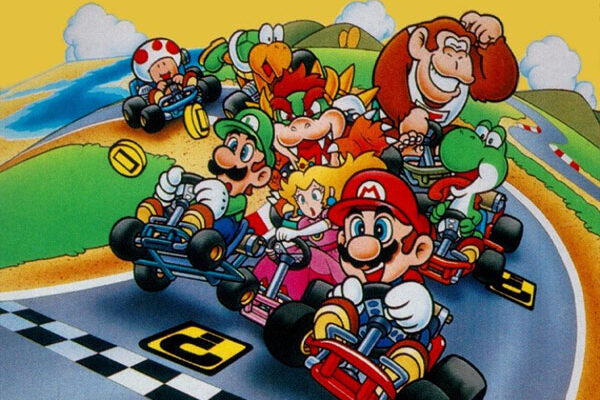 Take a regular, non-lunatic racing game. Thrust it into the ridiculous-fun-o-matic (whatever that is). What emerges from the bottom? Mario Kart, that’s what.

The first installment was released in 1992 for the SNES. It wowed the world with its funky Mode 7 sorcery, its wonderful presentation and its bite-your-own-face-off-in-fury, cheaty cheaty A.I. Here was the moustachioed maestro himself, introducing us to a genre that would soon explode with terrible pretenders. Need I remind everyone that even the Crazy freaking Frog got his own kart racer?

Super Mario Kart brought us the magic formula, and it has stubbornly changed little in two decades. Sure, the series has begrudgingly allowed spangly propellers and gliders and such since, but the core experience is mostly untouched. It’s pure, crazy couch co-op fun, toon-tastic chaos that is pure Nintendo.

Remember that pitched battle that erupted in your living room in the nineties, after some cad stole your star in the last turn of Mario Party? That’s very much the vibe here. Family friendly and wholesome as Nintendo may profess to be, it’s all filthy lies. The Blue Shell is still among the most ungodly villains in video games, and the whistling that heralds its approach… oh, the whistling. It’s like Indiana Jones running from that big ol’ boulder, only even more impending-doom-ier. 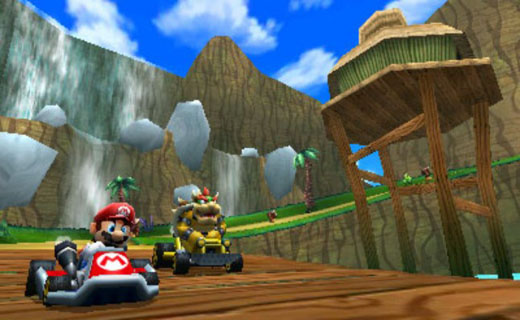 Favourite Mario Kart memories will be different for everybody. Perhaps it’s returning home after school each day to play with a friend. Or finding a cannily-hidden shortcut before they did, demonstrating it, and feeling like a prophet from the year 3000. It may simply be a specific track, or piece of music. Maybe it’s the balloon-popping gladiatorial contest of the battle mode. Whatever the case, for many, Mario Kart is more than a game.

It’s one of those childhood fixtures, really. Often, the appeal of retro games is pure nostalgia, reflecting on how much we enjoyed playing a game back in the day (however questionable the choice may have been in hindsight). I, for one, am now stuck with a lifelong love of the Mega Drive Jurassic Park, and I apologize to no man for it.

But in the case of the Kart, it’s different. The franchise endures for a number of reasons. Primarily because, as kart racers go, it’s as solid as a very rocky rock solid thing. Made of rock. It’s brilliantly accessible too, and truly fun for everyone. Grandma, the kids, hardcore players with Gamertags like KillTehNoobs88, everyone has a little time to try and wang green shells up each others’ exhaust pipes. You’ve grown up with the series, or you’ve merely dabbled and grown up aware of it. Either way, the influential series has had an effect on so many.