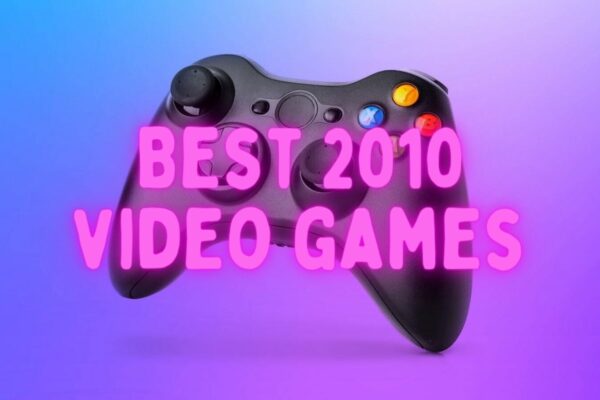 From Assassin’s Creed: Brotherhood to Red Dead Redemption, 2010 gave birth to games that transformed the world. Which game will win out in a decade with so many great games to choose from? In 2010, parents were more concerned about time and money spent on never-ending games than about violence in video games. Below are the best 2010 video games:

Mass Effect 2 is a PC and Xbox 360 action role-playing video game. BioWare was developed and published by Electronic Arts on January 26, 2010. It is the sequel to the original Mass Effect and the second episode in the Mass Effect series.

Fallout: New Vegas, role-playing 2010 video games. It was published by Bethesda Softworks and developed by Obsidian Entertainment. On October 19, 2010, it was published for PC, PS3, and Xbox 360.

Treyarch and Activision released Call of Duty: Black Ops in 2010. It was published for PC, PS3, Wii, and Xbox 360 in November 2010, with a Nintendo DS version produced by n-Space.

StarCraft II: Wings of Liberty is a sci-fiction real-time strategy game by Blizzard Entertainment. It was published globally on July 27, 2010, video games for PC and Mac OS X.

Harmonix developed Rock Band 3 in 2010 as a music video game. MTV Games and Electronic Arts, respectively, released and distributed the game. Rock Band 3 was first published on the Xbox 360, PS3, Wii, and Nintendo DS on October 26, 2010.

God of War III, 2010 video games, an action-adventure game published by Sony Computer Entertainment and developed by Santa Monica Studio. The game is the fifth edition in the God of War series and the sequel to 2007’s God of War II. It was first published for PS3 on March 16, 2010.

Halo: Reach is a first-person shooter video game for the Xbox 360. It was developed by Bungie and published by Microsoft Game Studios. Halo: Reach was published globally on September 14, 2010, as the fifth chapter in the Halo series of 2010 video games.

Sony Computer Entertainment’s San Diego branch developed MLB 10: The Show, a baseball simulation video game. The MLB: The Show is the PlayStation’s longest-running officially licensed baseball simulation game. Sony’s PS3, PS2, and PS Portable are all included. It was published on March 2, 2010, as the direct sequel to MLB 09: The Show.

Limbo is a puzzle platform created by Playdead and initially released by Microsoft Game Studios for the Xbox 360. The game was first launched on Xbox Live Arcade on July 21, 2010, and Playdead has subsequently ported it to various other platforms, including PC, PS3, and Linux.

Assassin’s Creed: Brotherhood, an action-adventure game by Ubisoft. As a direct sequel to 2009’s Assassin’s Creed 2, it is the third main installment in the Assassin’s Creed series and the second part in the “Ezio Trilogy.” On November 16, 2010, the game was launched for PS3 and Xbox 360.

Firaxis Games’ Civilization 5 is a 4X video game in the Civilization series. On September 21, 2010, 2K Games launched Civilization V and its demo for PC. On November 23, 2010, the OS X version was released.

Metro 2033 is a first-person shooter video game by THQ and developed by 4A Games. For PC and Xbox 360, the game was launched on March 16, 2010. Critics of 2010 video games praised the game’s horror features and engaging storyline.

Back to the Future: The Game is a visual adventure game. The game is divided into five episodes, each of which is accessible on different gaming platforms. The first episode was launched on December 22, 2010, for PC and OS X.

Skate 3 is a 2010 skateboarding video game developed by EA Black Box and released by Electronic Arts. It is the third edition in the Skate series and the sequel to 2009’s Skate 2. It was published in May 2010 for the PS3 and Xbox 360 in the United States.