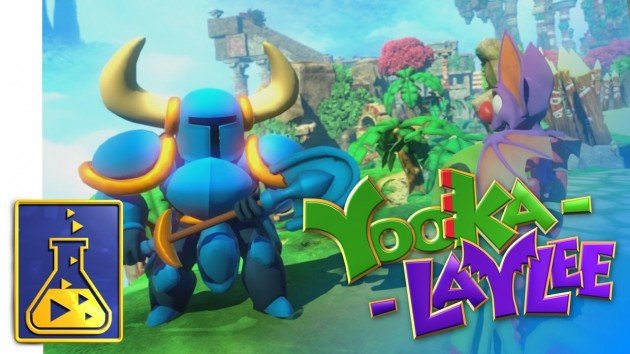 Playtonic Games, the new independent studio formed by several former members of Rare, has released a new trailer for their upcoming Kickstarter-funded game, Yooka-Laylee, focusing on the various characters that will be appearing in the game.  This includes major characters like the main antagonist Capital B and Trowzer the Snake (heh heh) who will teach you important techniques.  The one that’s captured the most people’s attention, however, is a special guest character hailing from another crowdfunded game.

Shovel Knight, the titular hero from Yacht Club Games’ sidescrolling action game, will appear in Yooka-Laylee as an NPC.  This isn’t the first time that the hero of shovelry has made a cameo in another game, as he is also making an appearance in SWDTech Games’ detective-based RPG Pixel Noir and will be a party member in Lab Zero’s RPG Indivisible.  The game Shovel Knight had it’s own fair share of cameos with the Battletoads appearing exclusively in the Xbox One version of the game and Kratos from the God of War series in the Playstation 4 version.

Yooka-Laylee is being built as a revival of 3D platformers like Banjo-Kazooie that the team was famous for as a part of Rare.  The Kickstarter campaign raised over £2,000,000 for the development of the game.  It’s set to release on PC, Mac, Linux, Xbox One, Wii U, and Playstation 4 in early 2017.