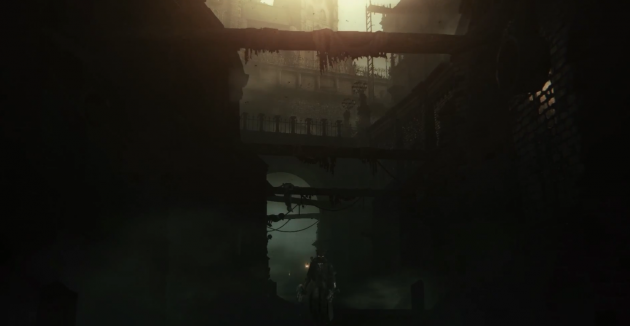 Bloodborne, FromSoftware’s newest monster, has been given the ‘new trailer’ treatment at Gamescom 2014, and by Gwyn, does it ever hit hard. Bloodborne gameplay received critical acclaim, with praise, particularly its high difficulty level, atmosphere, sound design, Lovecraftian themes, and interconnected world design.

Miyazaki dropping the more methodical approach of Dark Souls combat in favor of a more visceral, on-your-toes action game appears to be a smart move, as the action looks even more exhaustingly difficult and punishing than ever.

My gushing for all things FromSoftware never ceases. With that, however, comes exceptionally high expectations. Luckily, it appears that Bloodborne is shattering all of them with every new video.

Only time will tell if this game can manage to surpass the absolutely ridiculous standards FromSoftware has set for itself. If this trailer is any indication, they’re on the right track.

Bloodborne Gameplay according to Wikipedia

Bloodborne is an action role-playing game played from a third-person perspective and features elements similar to those found in the Souls series of games, particularly Demon’s Souls and Dark Souls. The player makes their way through different locations within the decrepit Gothic world of Yharnam while battling varied enemies, including bosses, collecting different types of items that have many uses, interacting with non-player characters, opening up shortcuts, and continuing through the main story.

At the beginning of the game, the player creates their character, the Hunter. The player determines the basic details of the Hunter; gender, hairstyle, name, skin color, body shape, voice, and eye color are some of the options the player can customize. The player also chooses a starting class, known as an “Origin”, which provides a basic backstory for the Hunter and sets the player’s starting attributes. The origins, while describing the player character’s past, do not have any effect on Bloodborne gameplay beyond altering starting stats. Another way the player defines their Hunter is by choosing what brotherhood they are a member of. These religious societies, known as “Covenants”, each have their views on the world of Yharnam.

The player can return to the safe zone, known as the “Hunter’s Dream”, by interacting with lanterns spread throughout the world of Yharnam. Doing so replenishes health, but repopulates all enemies in the game world. Lanterns also serve as the game’s checkpoints; the player will return to the last activated lantern when they die. Positioned separate from Yharnam, Hunter’s Dream delivers some of the game’s basic features to the player. Players may purchase helpful items, such as weapons, clothing, and consumables, from the Messengers using Blood Echoes or Insight, level up their character by talking to the Doll, or upgrade their weapons in the workshop, among other things. Unlike Yharnam and all other locations in the game, Hunter’s Dream is considered completely safe as it is the only location in the game not to feature enemies. However, the last two boss battles of the game take place in the Hunter’s Dream, although both are optional to the player.

Follow us and get the latest news delivered to your timeline!
bandai namcobloodborneexclusivefromsoftwaregameplaygamescom 2014namco bandaips4trailer
Previous ArticleRime Is Back With A Glorious New TrailerNext Article“How’s THIS for an Idea for a Game?” #1- The Murderous Monkeys of ‘Ape Escape’