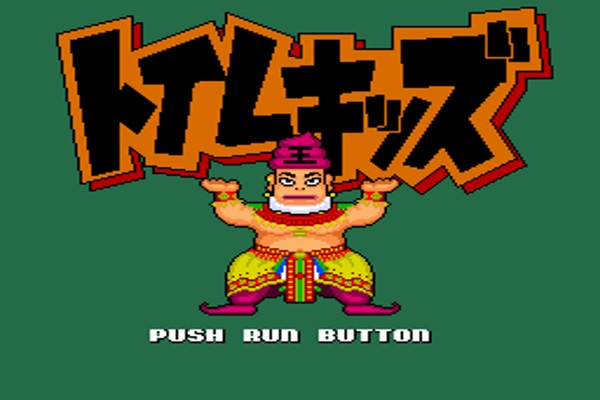 As we know, arcade games aren’t big on story. There’s a time and a place for complex, convoluted Da Vinci Code-esque plotting, and this isn’t it. Was Pac-Man an ambitious take on corporate greed, eating up everything in sight to turn a profit and eating your competitors alive in the process? No, no it wasn’t. Nuts to that.

Although that does sound quite intellectual, come to think about it.

But anywho, the Streets of Rage and Asteroids of the world are about action, not storylines. There’s some brief prattling at the beginning to set the scene, maybe a sparce cutscene or two in between levels, but that’s all you get. And all you expect.

Retro-style scrolling shooters in particular know this. Even the thoroughly demented ones. Ladies and gentlemen, meet Toilet Kids.

The premise is simple: a little boy needs the toilet in the middle of the night. While doing his business, he is sucked head-first into the lav and emerges in an oddly beautiful world. While floating on his tiny toilet-craft, he has to dispatch all manner of bizarre enemies, all to get back to bed. Maybe simple isn’t the operative word, but it’s too late to backtrack now.

You’ll meet what appears to be a genie made of poo. You’ll be attacked by huge frogs who pee on you, and angry flying penises. But hey, we’ve all been there.

At its heart, this PC Engine oddity from Japan is a fairly conventional shooter. You’ll collect power-ups, shoot mid-air opponents and bomb the ones on the ground. There are highscores to go for, and everything else you’d expect of the genre. It’s just the enemy design and the theme itself that sets Toilet Kids apart.

It has earned itself an immortal place in gaming history, for being the first title ever to feature creepy pig-faced spiders with bare human butts.

Follow us and get the latest news delivered to your timeline!
ArcadePC EngineRetroShoot 'em upToilet Kids
Previous ArticleDragon Age Inquisition: How to Fix the Black Screen BugNext ArticleFootball Manager 2015 Patch 15.1.4 Fixes Long Save Times, Other Changes