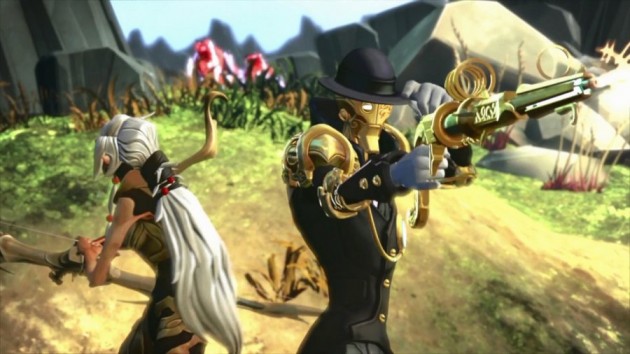 With seven characters announced and more to come, I can’t tell you how excited I am for the upcoming game : Battleborn. This game has 25 playable heroes and no hero is even close to being the same as they are all geared up with unique weapons and powers. There is even a leveling up system where you can level up your hero and fully unlock your hero’s true power. The game overall looks like a better Borderlands. Don’t get me wrong. I love Borderlands but to have more choices to pick from when it comes to characters, well that’s a major gaming fantasy.

While a trailer and a few gameplay videos has been released for this game, it is enough for me to write about it and pre-order the game. Not only is the art stunning but you can play competitive multiplayer with up to 10 players online. Multiplayer has three different types of battles to choose from such as :

Incursion
A base defend mode where you must defend your base from the waves of minions while still trying to destroy your opponent’s base.

Devastation
A capture-the-flag type of game as players go head to head in a death match while capturing and holding objectives on the map, to secure a win.

MeltDown
Players protect their minions and guide them to the middle of the map where points are scored by the minions throwing themselves into an incinerator. The team with the most points takes the game.

Not only is there multiplayer but there is a story mode that can be played with friends online or splitscreen.

Needless to say, there are a lot more than meets the eye when it comes to Battleborn. From the gameplay, to the co-op, to the characters, I can’t wait to get my hands on this game and review it.

Check out the official Battleborn site for any updates or news on this thrilling upcoming game.

Follow us and get the latest news delivered to your timeline!
BattlebornborderlandsMultiplayer
Previous ArticleWhy Splatoon is My Favorite Shooter Since Team Fortress 2Next ArticleRainbow Six: Siege Will Not Feature Squad AI on Single Player