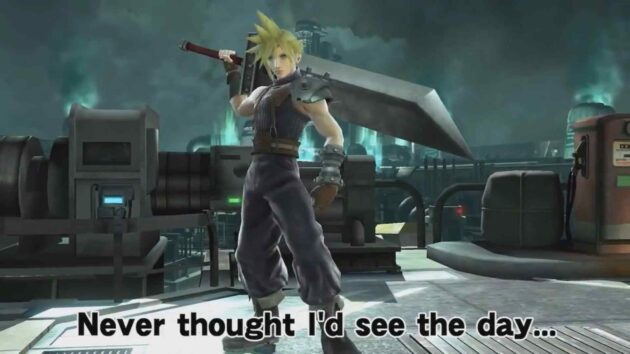 Today, Nintendo held its first Nintendo Direct since the passing of Satoru Iwata earlier this year and it closed with the shocking announcement that Cloud Strife, the main protagonist of Final Fantasy VII, will be joining the playable roster of Super Smash Bros for Wii U and Super Smash Bros for Nintendo 3DS.  There was plenty of speculation that a new fighter would be revealed today, but this is one of the most unexpected candidates imaginable.  While Cloud is an iconic character of a major franchise, Final Fantasy VII is a game mostly associated with the Playstation brand and has never been released on a Nintendo console.  Cloud’s only appearances on Nintendo systems have come as cameos in other Square Enix games such as Kingdom Hearts: Chain of Memories.  It seemed more likely that he would have joined the cast of Playstation All-Stars instead, so seeing him is Smash first is unbelievable.  Oddly enough, even seeing Solid Snake from the mature Metal Gear Solid series appear alongside cartoony characters like Mario, Sonic, and Pikachu in Super Smash Bros Brawl felt like it made more sense given he had a history on Nintendo systems.

As expected, Cloud’s playstyle revolves around his massive buster sword for heavy-hitting attacks.  His special attacks will include a short-range slash wave, a close-range whirlwind spin, and the ability to perform a Limit Break that will boost the power of his attacks significantly.  His final smash is his famous Omnislash technique, which will function in a similar fashion to Ike’s Great Aether final smash.  Performing the Omnislash will have him dash forward and knock anyone caught in his path into the air, where he will then rack up damage with a number of slices before bringing them back down with an explosive final swing.  Cloud will also have an alternate costume based on his appearance in the film Final Fantasy VII: Advent Children available.

In addition to Cloud, a new stage based on the city of Midgar will also be added to both versions.  On the surface, the Midgar stage appears to be a reskin of the simple Battlefield stage, but it comes with hazards based on the various summons that appeared in Final Fantasy VII.  The summons will cast their effects on the stage at random intervals with abilities including flooding the stage, bringing down a massive laser, and even slicing the stage clean in half.  Of course, there will also be a Final Destination variant of the stage included where the summons do not interrupt the fight.  Much like when Ryu was added to the game, the new Midgar stage will come bundled with Cloud.  There is a also a new hat added for the Mii Fighters on the way based on the chicken-like Chocobos that serve as the icons of the Final Fantasy franchise, although this most likely won’t be bundled with Cloud.

When Cloud will be released remains to be determined, but there is a special broadcast for Super Smash Bros set to be aired sometime this December.  No details were given on what the broadcast would entail, but it’s extremely likely that we will see the winner of the Smash Ballot finally revealed.  You can check out the full Nintendo Direct, with Cloud’s reveal trailer starting at 1:04:52, here.  What other fighters could come out of left field and join the cast of Super Smash Bros?  Which characters are you still holding out hope for?  Honestly, I wouldn’t be surprised to see Scorpion from Mortal Kombat join in at this point.