The Witcher 3, for those unaware, shipped with a mighty fun card minigame called Gwent. For evidence of Gwent’s popularity, just look at this mod that imports Gwent cards to the game Tabletop Simulator – people can’t get enough of this damn game, and for a very good reason. Gwent requires all the right elements of strategy, skill, luck, and quality of deck to get nearly anybody hooked.

In quick summary, Gwent is a collectible card game where you face off against another player’s deck for up to three rounds. You have five kinds of playable cards: Infantry, Ranged, Siege, Hero, and ‘special’. The first three are named to correspond with their place on the battlefield. Hero cards are usually untouchable by the special cards and their status effects, while some Hero cards also grant additional benefits. Special cards are usually weather cards, which effect the power of all cards stationed on a given terrain. The special card that will cause you to potentially destroy your console/PC with white hot indignation is the Scorch card – which has the fun effect of instantly destroying one a card of whoever it’s played against (for the duration of the round).

In order to get new cards, you have to beat NPCs or buy them from stores. This guide is designed to give you some sneaky tactics that should com in handy against nearly every foe in the game – provided you play with the fist deck of the game, The Northern Kingdoms.

The game becomes very difficult throughout Witcher 3 – culminating in a grand tourney for Gwent players that you need to be ready for lest you want to have your ass handed to you by a mouthy Elf or Novigradian noble. You need to get to work early on in the game building up your deck if you don’t want a frustrating experience later on. But even if you don’t start playing Gwent until later on in the game, most of these strategies will still pay off.

There are a number of, shall I say, underhanded tactics that can really help you mop the floor with anybody’s Gwent deck. Some of these strategies won’t pay off in specific scenarios: for example, using the ‘Siegemaster Foltest’ leader card, won’t work against Emerys of Nilfgaard’s ‘The White Flame’ leader card. In those cases, I’ve tried to provide a plan B. So enjoy, and good luck on winning every Gwent card in the game! 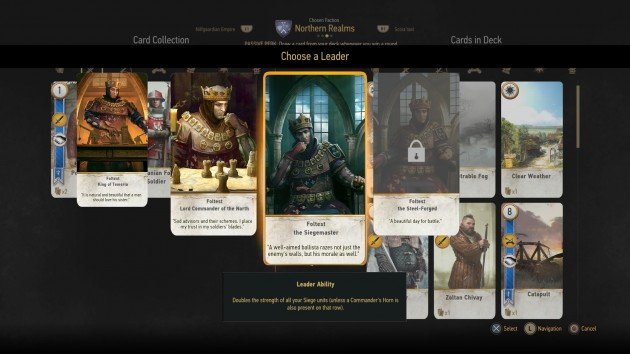 1. Win the Siegemaster Foltest card in the palace of Vizima

This one is somewhat important, though not essential per se, to having an amazing Northern Kingdoms deck. You can win it very early in the game, before ever having a chance at scoring the ‘Commander’s Horn’ card. Both ‘Siegemaster Foltest’ and the ‘Commander’s Horn’ cards accomplish the same basic benefit of doubling the attack power of all your siege cards – but unlike Commander’s Horn, since Siegemaster Foltest is a leader card, it can’t be taken off the field for the turn’s duration. Using this alongside a deck full of siege cards – especially in conjunction with two or three of the ‘Kaedweni Siege Expert’ cards – can boost your trebuchets and ballistas to huge attack power numbers. If you plan to use this strategy, make sure you bring a ‘Clear Weather’ card as a Plan B. And if you’re going against the Nilfgaardian leader card that nullifies all leader card special abilities, you can buy a ‘Commander’s Horn’ card early on from the Innkeep at the Inn at the Crossroads in Velen.

2. Determine your opponent’s main line of attack, and plan for accordingly

This is one of the cheaper tactics, but I find it works on every opponent I struggle to beat the first time around. First, you play a ‘burner’ game with the NPC – in other words, you aren’t trying to win yet. You’re just trying to provoke your enemy with enough cards to see which type of cards he or she favors. Oftentimes, this can be guessed at beforehand based on the Faction the NPC uses. Those who use the Monster faction almost always play with entirely close range cards – so bring along a bunch of ‘Biting Frost’ cards. Those who use the Northern Kingdoms often rely upon the siege cards, and the Nilfgaardian faction uses (from what I can tell) a combo of all three types. But even in their case, playing a test round to see what kind of cards the NPC has can give you the strategic edge to beat them senseless when the real card game starts up. 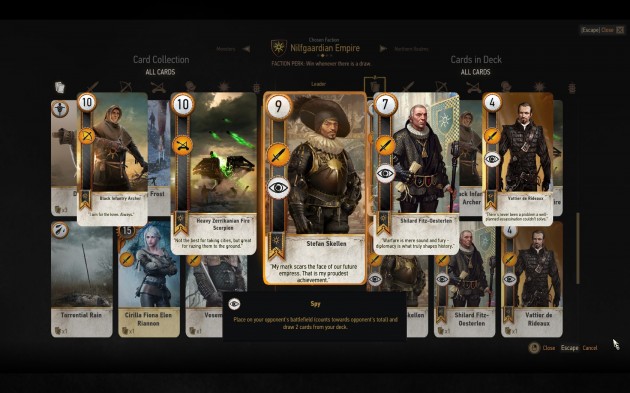 3. Use spies, but only at key points

There are a number of different ways you can use Spy cards to gain the upper hand – but, when used incorrectly, the Spy cards can also guarantee certain losses. Here are the best times to use Spy cards, which give the opponent a small boost in power at the expense of granting you two new cards:

a) If you’ve already lost the round. If your opponent is beating your score by 30 points and then skips the rest of the round, don’t waste a ton of cards trying to match his score. Instead, use this opportunity when his hands are tied and you face imminent defeat to plan for the next round. Put down all the spy cards you can at this point, and rack up some new cards. If your deck has been set up well, you’ll likely get a card that has the potential of turning the tide.

b) If the ‘Biting Frost’ card is already active. This reduces the amount of hit power your spy gives your opponent to 1, so at that point there’s little risk in using Spies to build up your deck mid-game.

c) As a last-ditch strategy. This is the riskiest of the three scenarios, since you might be giving your opponent the edge he or she needs to beat you. But if you have no other option, or you face a particularly difficult opponent, hold out on using the Spy cards until the very end. Who knows what cards they will shuffle into your hand? 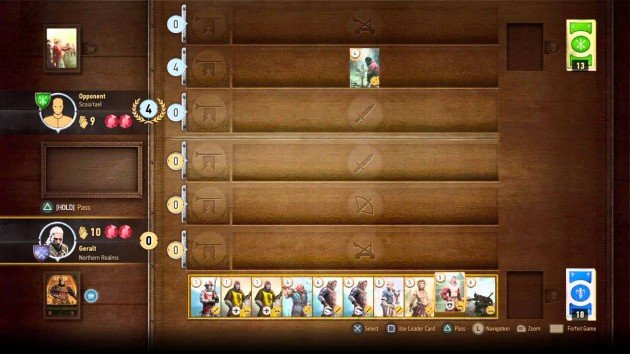 4. Set up a strategic deck

In every round of Gwent, your hand is randomly pulled from whatever cards are in your deck. You need at least 22 cards with hit power to play with the deck in question – but as you build up a deck past the minimum number, don’t be shy about jettisoning cards that give little or no strategic worth. In the Northern Kingdoms deck, you start out with a number of cards that only give 1 attack power and no bonuses. Get rid of these, ASAP! They don’t do much except occupy space that could have gone to a better card, so get rid of them. And if you know your enemy is vulnerable against certain types (see tip 2), stack your deck accordingly.

5. Use Yennifer and the Medic card together as much as possible (but only in round 2 or 3)

The Yennifer card, which is obtained from the Oxfurtian innkeep Stjepan, is extremely useful because it allows you to pick any of your discarded cards and instantly play them. One of the most devastating moves you can pull is to use Yen’s card to bring back the Medic – which doesn’t work the other way around, since Yen’s card is a Hero class card. When done the right way, Yen’s 7 attack power is added to the medic’s 5 – and then you can use the Medic’s ability, right away, to play another card from the discard pile. I’ve used this trick more times than I can count to go from a very low attack power to a huge number, especially by resurrecting Siege cards. Don’t underestimate this technique. 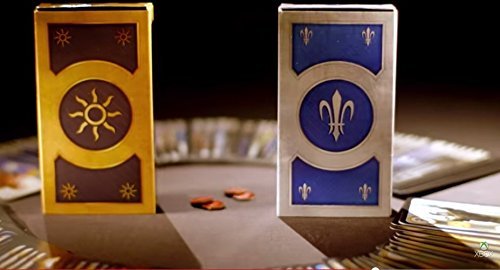 Cards with the Morale Boost ability – like the ‘Kaedweni Siege Expert’ cards – can net you a lot of attack points when stacked together. Though on their own they only provide 1 point, stack three Siege Expert cards together and you have 9 points just on their own. Start dropping some of those 6 and 5 attack point siege weapons, and you’ll find that every card you play is granted an additional 3 points from those Siege Expert cards. You can use this technique to stack your siege deck and build up huge attack power points – just make sure you have a ‘clear weather’ card on standby. Because your opponent can always use ‘Torrid Rain’, which cripples the siege row entirely.

Decoy is an extremely cheap card you should only use if you know you’re going to forfeit a round. It’s great to use in conjunction with Spy cards, at any point where you’ve decided to cut your losses and plan for the final round – because it withdraws any card on the field back into your hand.

As for the ‘tight bond’ cards, the best vanilla deck cards of this sort to play are the set of ‘Blue Stripes commando’ cards you get from the game’s beginning. Together, these rack up 16 points – which, particularly early on, can be devastating for your opponent. Just note that your opponent can and likely will play a Scorch card if he or she has one, which will negate the ‘tight bond’ advantage by destroying both cards in one fell swoop.

7. Throw the first battle to win the war

This is a trickier tactic that requires a few things: you’ll need as many Spy cards as you can find, as well as a few cards in your hand that you definitely don’t want. This is a great tactic for players early in the game, when you don’t have enough cards with attack power to leave out crummy cards that only give 1 point. Play all the cards you don’t want, let your opponent burn as many cards as possible trying to beat you – then, once their score gets high enough, they will pass the round. At that point, play all your spy cards. This should give you the huge advantage of a) giving you 2-4 new cards from your deck and b) giving you a larger number of cards in your hand than your foe. In round 2, the NPC will likely pass right away – because it doesn’t want to burn anymore cards against you, provided your hand’s number of cards is high enough. This just leaves round 3, which you should have no trouble winning unless the Spy cards generated a lousy hand for you. In which case, just see tip No 2 and try again!

There you have it – some underhanded yet effective techniques to win Gwent with the Northern Kingdoms deck. Let us know in the comments if you have any additional tips, or how these tactics payed off for you.

Follow us and get the latest news delivered to your timeline!
Card Gamegwentstrategieswitcher 3
Previous ArticleHitman Will Release on PS4 Digital Only First, Retail Afterwards, Might Be Episodic GameNext ArticleFallout 4 Demo Will Be Featured At Quakecon