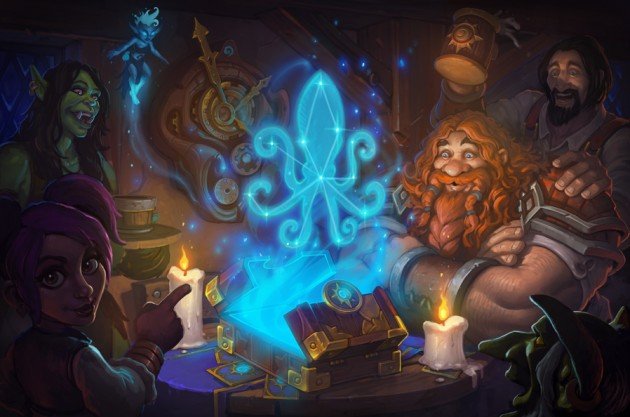 Big changes are coming to Hearthstone with the next expansion.  Along with new cards, the next content update will also feature a number of major changes that will alter how the entire game is played.  For one thing, the single most requested feature for Hearthstone, an increase in the amount of deck slots, is finally coming.  All players will have eighteen deck slots available, double the current amount.  That is automatically a major deal, but that isn’t even the biggest change that’s on the way.  The really big news is the introduction of two new modes that online play will be divided between.

Online play will be split between Standard and Wild mode.  Ironically, it’s Wild mode that will be the more normal one for those that are already used to Hearthstone.  Wild mode will play much the same way as the game is currently played with all cards across all expansions being legal to play.  It’s in Standard mode where the rules get shaken up and certain older expansions are rendered unusable.  Once the next expansion is added, it will begin what Blizzard is calling the Year of the Kraken, where only cards included in the Basic and Classic sets and all the expansions released in 2015 and 2016 will be legal for Standard play.  All cards included in Goblins Vs Gnomes and Curse of Naxxramas will not be usable in Standard play.  Also, once the first expansion of 2017 releases, the cards in Blackrock Mountain, The Grand Tournament, and League of Explorers will also start to be rotated out of this mode.  The Basic and Classic sets will remain constant fixtures throughout the game’s history and will never be phased out.  Both Standard and Wild will have their own Ranked ladders, and other modes like Arena, Adventures, and most Tavern Brawls will be classified as Wild and have all cards considered legal.

This could potentially be the best thing that has ever happened to Hearthstone.  Ranked play has had a regular problem of its meta being dominated by a select few decks that are especially powerful and only a few select new cards that play into those themes entering the meta.  On top of making things stale, this has made it difficult for new players to get started as there are so many cards needed to stay competitive.  Standard not only encourages developing new decks, but also provides a more welcoming experience for players who are just beginning their collections.  This kind of segmentation seems like just the kind of shake-up that Hearthstone has been needing and I haven’t been this excited for the game since I first started playing it in the vanilla version.

Sadly, I can’t help but have plenty of concerns about this change, as well.  While there’s a lot of potential good that can come from this, there are also ways it can go horribly wrong.  One thing I immediately dislike about how the old expansions will be phased out is that they’ll no longer be available to purchase from the in-game store.  Once the new expansion releases, GvG packs and Naxx wings will be gone.  You will still be able to craft all the cards from these expansions using dust, but you won’t be able to spend in-game gold or real money to acquire them.  One exception to this is that, if you own at least one wing of an adventure, you will still be able to purchase the remaining wings of that same adventure at your leisure even if that adventure has been retired.  It seems like a harsh punishment for those of us trying to build a complete collection, but I suppose it helps idiot-proof the game for new players who should be focusing on Standard mode.  This also comes with the advantage that old Adventure cards will no longer be soulbound and can be disenchanted for dust.  However, if you have any interest in Hearthstone, I advise you jump in now and pick up one wing from Naxx while you can.  Not only are the bosses a fun challenge, they’re much easier to go through than crafting the individual cards.

The next big concern I have is how the loss of certain cards can hurt the meta.  While I’m happy to see Piloted Shredder and Dr. Boom fall by the wayside, there are plenty of valuable anti-aggro cards that we’ll also be losing.  Annoy-o-tron, Sludge Belcher, and Antique Healbot are all key to countering extremely fast decks like Face Hunter and Aggro Shaman, and those decks will still have most of their tools when Year of the Kraken rolls in.  While we’ll still have Reno Jackson, the king of shutting down aggro decks, we are going to need at least one or two new neutral cards introduced in the next expansion that help with survivability.  That’s just one element to consider with two whole sets being set aside, and this is going to be a constant factor with each new annual cycle.  How well certain decks can be kept in check is going to depend heavily on the designers keeping a close eye on what niches can become overpowered and which deserve to be bolstered.  Considering these are the same people who seem convinced that Taunt Warrior is a thing that exists, that is fairly scary.

The last thing I’m worried about how Standard mode will effect the design philosophy of future cards.  While Standard is being pushed as the competitive mode, I’m still interested in the possibilities for Wild mode.  Introducing Standard mode gives the developers more freedom to introduce new cards with a more focused meta, but it also gives them an excuse to throw the balance of Wild into complete chaos.  I don’t expect Wild to be especially refined and I’m open to it having plenty of crazy decks, but I don’t want the response to blatantly broken decks to be a shrug and a cry of “Thaaat’s Wild mode!”  I still want Wild mode to be a legitimate playstyle in its own right.  I want balance changes to still be on the table for older cards and for some consideration to be given for how Wild mode will be effected by new cards.  My worst fear for Wild mode is for it to become dominated by a small selection of decks like we’ve seen with Face Hunter and Secret Paladin in the past.  Wild mode should live up to its name and be fertile ground for experimentation and unpredictability, not relegated to regimentation.  With it having its own ranked ladder and being the playstyle for several modes, it looks like Wild mode will still be receiving the love and care I’m hoping for.  All the same, I can’t ignore the nagging feeling at the back of my head that Wild mode will be used as the dumping ground for the most egregious net-decking.

What are your thoughts on Standard mode?  What has you excited or worried about how Hearthstone will be changing this year?  With all my own concerns, I do still see the pros outweighing the cons and this being a change for the best.  There’s always a chance that this could blow up in all our faces, but those are just the risks you have to take to push things further.  Once the new expansion is revealed later this season, it will either dispel or confirm our reservations on this evolution.  Until then, it’s important that we voice our opinions on what the future can hold as it’s the only way we voice to the developers what we want out of the game and try to shape things in a way we can all be happy with.

Follow us and get the latest news delivered to your timeline!
BlizzardCurse of NaxxramasGoblins versus GnomesHearthstoneStandard ModeTCGYear of the Kraken
Previous ArticleTop Eleven – Best Tactic to Use in 2016Next ArticleBest Laptops to Play XCOM 2