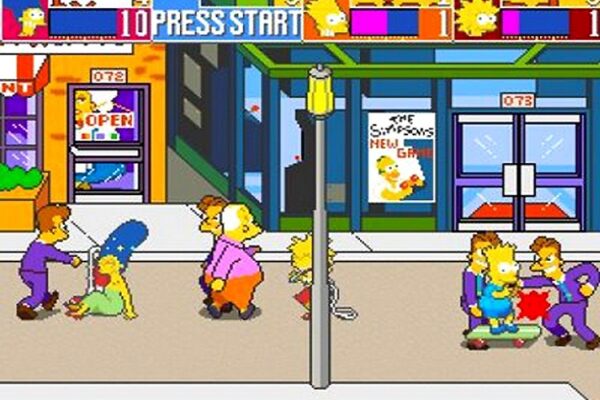 Now, I’m not the type to bust out a long, rage-tastic diatribe about licensed games. Let’s all just admit that they (usually) suck monkey nuts, and get on with our lives.

Still, it wasn’t always that way. Like the decrepit old gamer I am, I remember the glory days. The days we had truly fantastic games-of-the-movie to enjoy. The likes of the Mega Drive’s The Lion King and Aladdin are still celebrated as some of the best platformers of the early nineties. Right around this time also came… The Simpsons Arcade Game.

Released by Konami in 1991, this was a scrolling beat ’em up in the Streets of Rage vein. Think of it as a toony Golden Axe, with less of those dodgy-looking dragon things to ride and more of Homer swinging Marge around by the hair as a special attack. You don’t want to miss that, so let’s take a look.

As far as plotting goes, this is all fairly conventional for the genre. There’s been –wait for it– a kidnapping. Here, it’s Maggie, after she inadvertently swallows a flying diamond during a jewellery raid. The thief is none other than Waylon Smithers, who snatches the girl so as to not lose her precious shiny cargo. Naturally, Ma and Pa Simpson don’t take kindly to the theft of their daughter, and so they set off in pursuit of Smithers with Bart and Lisa in tow. 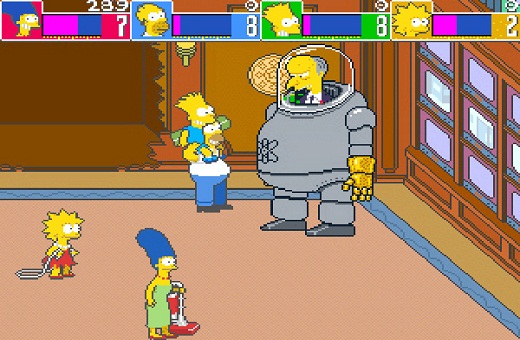 There’s a little suspension of disbelief needed here. When was ol’ Waylon ever such a dastardly criminal? Where did he get a whole army of goons to attack the family? Is he suddenly some kind of camp underworld kingpin? None of that matters. This is a fine setup for a little side-scrolling punchin’-and-a-kickin’ goodtimes, and that’s all we need to know.

You’ll chase Burns’ underling through all manner of familiar Springfield locales, from Moe’s Tavern to the power plant and Krustyland. There’s also a level set in a dream sequence, which is a popular device in the show itself. Throughout the stages, there are cameo appearances from other Springfieldians, and lots of in-jokes and such which are sure to be appreciated by fans.

In gameplay terms, too, this is a standard-issue brawler with a Simpsons makeover. Controls are as simple as you’d expect, with the usual jumps, throws and quick combos on offer. There are also tag team attacks, appropriate to the characters using them, which are highly damaging and pretty darn funny too (Homer’s spousal abuse mentioned above, for instance).

All in all, The Simpsons Arcade Game is a solid beat ’em up. It’s no genre classic, but it’s a fine and fan-pleasing effort. In licensed game terms, the Simpsons have fared a little better than most through the years, and this is my favourite title bearing their name.