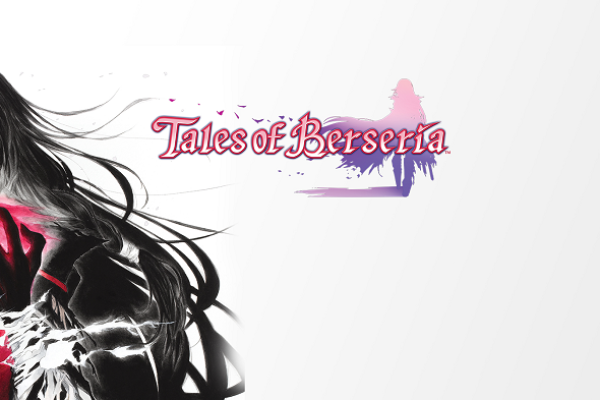 Tales of Berseria Review. In a genre permeated with the new generation growing weary of traditional JRPGs, the Tales series has remained steadfast. Despite the clamor for open-world environments, the series has attempted to update its style while staying true to its roots. Tales of Zestiria was a step in the right direction but fell short with fans. I brought Zestiria, the collectors’ edition in fact, and while there weren’t any egregious errors, I just didn’t care enough to finish the game. Tales of Berseria, set 1000 years before Zestiria is a return to form for every JRPG fan.

Disclaimer: This Tales of Berseria Review may contain some light spoilers for the early parts of the game.

“Everything is worth watching and discovering to learn more about the characters and the world”.

The story is Dynamic Dark and Engaging

The story follows the adventures of Velvet, a once doting sister turned vengeful demon. After a certain event unfolds in the first hour of the game, she is exiled to a jail cell for 3 years. In that time she has snacked on demons and had plenty of time to plot her revenge. With the help of her brother in laws Malakhim Series, she escapes from the jail picking up the beginning of her rag-tag group of companions. Mind you, this is only 2 hrs or so into the game and the world unfolds from here. It is easy to take this story at surface value but stick with it and you won’t be disappointed.

The story is told through the series staples skits, anime cut scenes, and in-game cut scenes. Everything is worth watching and discovering to learn more about the characters and the world. If you played Zestiria or watched the anime there are many callbacks. Players will be able to see how the names and lore have changed. For example, Malakhim is Seraphs that are able to be seen by the general population after the events of the prologue. Why did things revert? The game will explain it.

This game follows the traditional scope for JRPG tropes. The only outlier may be Velvet because she is the anti-hero to Zestiria’s Sorrey. She is selfish, arrogant, single-minded in her revenge with no remorse. For some that have been a turn-off but for me it is refreshing. One of the themes of the game is reason versus emotions. The characters are battling this dichotomy throughout the game and it’s intriguing to see how it manifests itself in each one.

The skits and side quests help to further flesh out the characters, their motives, and their growth. If you’re a side quest skipper I wouldn’t suggest it for this game because you may miss things. You won’t miss anything major and important things are reiterated in the main quest so never fear. There has been some conversation about the English voice acting but I found it fine. Players have the option to change it before they start every save so test it out.

Music and World Building is Perfect

Full disclosure, I’m not a fan of open-world games. But this game seems to get the formula just right. With the inclusion of fast travel and items to lower enemy encounters players can travel the world unhindered if they choose to. The world is colorful, big, and littered with random items and treasure chests. Early in the game players are tasked with finding various Katz by collecting Katz orbs that are everywhere. Opening these chests is easy especially if you go on foot.

The environments are not repetitive and reflect the region they are located. Hellwaus is an icy cold climate so there is snow everywhere, the NPCS are wearing parkas and the enemies tend to be colored in deep blues. The area music tends to be light giving the area personality. The whole thing flows and fits for each place characters visit.

Quality of Life Changes For Everyone

Players can customize every part of their gameplay experience at will. I mentioned the voice acting can be changed at the beginning of every game. The game’s battle difficulty can be changed in-game at any time. When the game starts the sound came from my controller and TV. That can be changed at will as well. The skits can now be skipped through to help the time pass quickly. If there is a side conversation available the NPCS have a green exclamation point above their head. This even counts for staying at the Inn so players no longer need to waste Gil to not miss scenes.

I mentioned the Katz chests above but these chests also contain the costumes for the characters. One of my gripes was being nickeled and dimed for these, and you can still buy them, but there are more in-game options.

Skits May Be Too Long and Too Plentiful 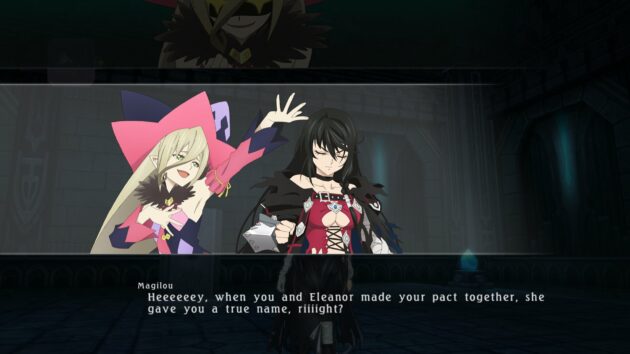 This is an odd complaint since I said this is a good thing about the game. Sometimes you want to get from A to B and you’re unable to do that because the game will stop you from the conversation. When it does it can appear to be long-winded especially if the skit is comedic. While it’s awesome for character building it can be annoying for players that want to grind away.

It’s Hard To Get Ingredients For Cooking

Cooking is always one of my favorite things in the Tales series but they made it more complicated. There is a basic recipe that players can easily buy and find ingredients for but some others require an extra step. Players will need to use ship exploration to find new recipes and ingredients for those recipes. The game keeps track of where you get them but you have to wait 30 minutes to get it. Even then, those ingredients are RNG-based so you may not get what you need. As you travel to different locales foraging for the stuff in dungeons and the environment may help but I just want to buy it.

The Battle System Is Fun But May Be Broken

“At this point, I can probably perform Power Ranger call outs of all Eizen and Magilou’s Mystic Arts”.

I wasn’t a fan of Armitization in Zestiria. I wanted to see all my characters on screen and didn’t want powerful spells locked behind combining. They did away with that system in Berseria. However, Velvet has the potential to allow players to button mash and strong-arm their way through the mobs with no real strategy or skill. For example, when she is in her demon form she can’t be killed but her health is ticking down faster the longer she is in the stance. This quirk can be exploitable if you know what you’re doing.

The way the game tries to explain the battle system can be a bit confusing and overwhelming as well. Luckily the help tab is easily accessible for review at any time for pointers. Artes are still here in their Tales glory but when your other characters perform them there is no way to shorten or skip the sequence. At this point, I can probably perform Power Ranger call-outs of all Eizen and Magilou’s Mystic Arts. It may be annoying for some players but I can tune it out.

Enhancements, Dismantling and Mastering Skills Can be Overwhelming

I’ve used this system for the characters’ weapons and I’m still not sure what I’m doing. The game will throw repetitive sets of gear at you but each one may have a unique extra skill attached. The characters can permanently learn the skill that each piece of weapon/armor contains after their earn enough experience for it. What that means is that characters may have on a low-level piece of gear even if a better one has come along until said skill is mastered.

This has become more of an issue for me as later party members trickled in. There were sets of gear that I dismantled that may have had skills for them to learn. Players will either, not worry about it, save sets of gear until they get a whole party, or re-buy old sets of gear to have the party member learn skills later on. I went with the save set option once I figured out the pattern. The one bright side is that there does not seem to be a limit for the number of items and armor you can carry so horde away.

Exploration and Hide Out Are Underwhelming

I mentioned the exploration when it comes to recipes but it serves another purpose. Players can find extra outfits, rare sell-able items, and special items that provide lore for the world through exploration. Players will have to send the ship out constantly at 30-minute intervals to unlock additional islands. This feature while interesting didn’t add much to the experience. Another feature was the introduction of a hide-out player will acquire for story reasons. There is no way to customize the building at all which is a letdown. Since players can already get costumes from exploration, incorporating furniture in the finds may have helped make it feel more like home.

Menus Make The World Go Round 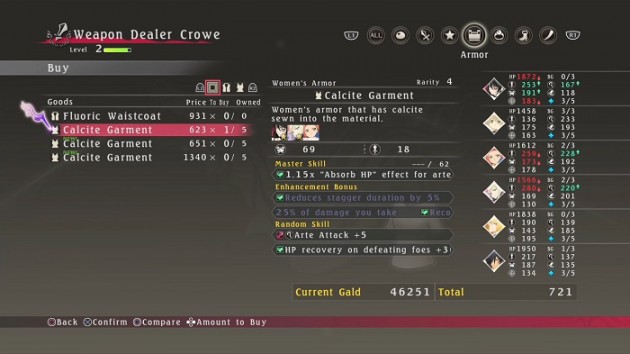 Most JRPGS have menus in them. It comes with the genre and it is to be expected. This game just appears to have an abundance. There are so many tabs that the game makes fun of you and gives players a title for it. The good thing is that they are easy to sort through and manage to stay organized.

“I had to train myself to look in that corner at all times in fears of missing a skit or wasting valuable exploration time”.

Why Are the Notifications There?

I have virtually no complaints about this game except for one thing, the placement of notifications. On the lower right-hand side, there are two icons, one for when your exploration ship returns and when a skit is available. The exploration icon is a gray-white ship that is kind of easy to spot. The skit icon is a green outline of a person and the name of the skit doesn’t always stay active. I missed this entirely for the first 2 hours of the game. Mainly because a lot of the environments have blend-able backgrounds like grass. I had to train myself to look in that corner at all times in fears of missing a skit or wasting valuable exploration time.

Who Is This Game For? 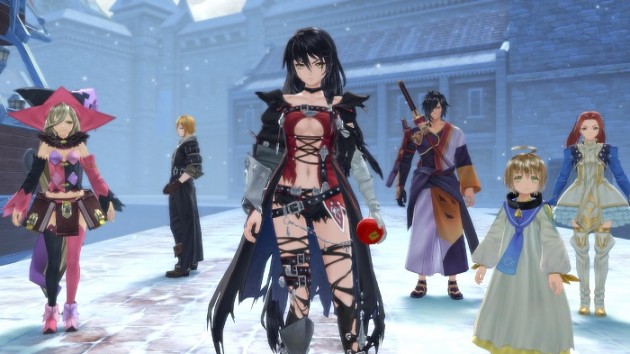 Disclaimer: Since this is my first review, Tales of Berseria Review, for the site. I will say that I do not care for traditional review scores and will instead recommend if this game is worth the time of the player.

This game is for JRPG enthusiasts who want some comfort food. In the vein of I Am Setsuna, Tales of Berseria scratches an itch that Final Fantasy 15 left wanting. If players are into story, character development, free extras and plenty of game modes to challenge themselves with this is a good fit. It is worth the 60 dollar launch price and if you were like me, the Collector’s Edition provides some great goodies as well.

Have you played Tales of Berseria? What did you think of the game? Did you have some of the same likes and dislikes? Let us know in the comments section about your Tales of Berseria Review.