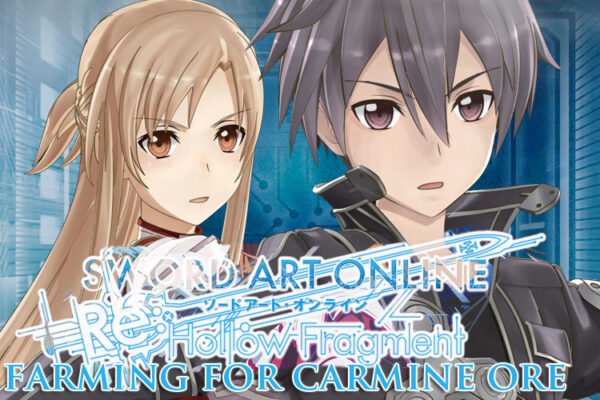 Carmine Ore is used to upgrade the Strength attribute of weapons. When you first upgrade, it’ll cost 1 ore but that number will increase the more you upgrade. To upgrade my Saintblade Ragnarok from +14 to +15 it cost me 30 Carmine Ores. From start to finish I ended up using around 250 ores simply because I had enhancement fail on me.

The maximum amount of ores you can hold is 198. 99 in storage and 99 in your inventory.

But where to farm these ores? Many monsters have a chance to drop them, from skeletons to slimes. It’s a pretty rare drop and you’ll notice the amount will increase very slowly. Completing some Hollow Area missions can reward you with ore too but it’s not exactly the fastest.

To begin with, you will need the DLC pack that has been released. It has the mission we’re looking for; The Nightmare King’s Legacy. The recommended level for this mission is 120 and unfortunately you can only do this in single player. It took me around an hour to complete because you’ll be killing a total of 666 kobold enemies. Once you hit that number, the mission will be complete.

You can bring along lucky potions and weapons with increased drop rate to help boost the chance of obtaining carmine ores. You’ll also get a ton of the item ‘Therian Tail’ which is used for weapon creation.

Once you go into the Hollow area, activate the console and go down to the DLC Hollow Mission option. Activate the Nightmare King’s Legacy. You want to teleport to Alevaste Darkmire, head towards the Vaults of the Fugitive Beastmen and then into the Old Master’s Training Grounds. That is where the quest is located.

AOE skills are godly here as the area isn’t too large and you can round them up very quickly before dispatching. At level 190, they didn’t pose much of a threat as their attacks would often miss but if they’re hitting you too much, feel free to stop and heal at times. Defensive buffs and hyper armor is pretty good here too but they’re not entirely needed unless you’re low in level. It’s up to you – if you’re taking massive damage, use defensive debuffs. If not, then simply ignore that in favor of attack buffs and focusing on wiping out the group.

You won’t get ores every time an enemy is defeated but you will get plenty. I managed to get 90 in my run which may not seem like much but it is the fastest method I’ve come across so far. Fighting normal enemies and doing missions would net me less then ten for an hours work. If I was lucky. Sometimes I would get none.

So this method is well worth doing, even if it’s quite grindy. At least you are guaranteed carmine ores.

Have another good way to get these ores? How many ores have you gotten in a single run? Did you do this at low level or waited until you were a bit higher? Let me know in the comments below!